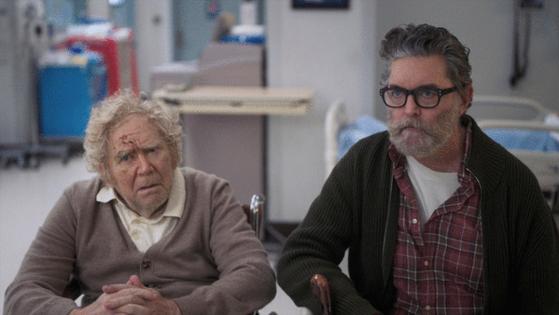 Many television writers rooms have "a wall," some swath of whiteboard on which the team tracks episode beats, narrative arcs, character development — whatever bits of the creative process it might be helpful to lay out visually. (If you ask writers what they miss most about working in person during this pandemic, their first answer will be their peers; the second will be their wall.)

Every wall is different, but the one developed by "New Amsterdam" creator David Schulner may be unique; it is filled with the names of actors with disabilities for whom Schulner is determined his team will write a part — and not in one of those sad-but-heroic stories that often revolve around characters with disabilities.

Jones has late-stage Parkinson's disease — he was diagnosed 18 years ago — but he also has a brilliant sense of comedy. It's on full display in the latest episode of "New Amsterdam." Two years after his audition, Jones is half of a moving and delightful "Sunshine Boys"-type storyline, offering moments of humor and humanity in an episode that's fast-paced and exposition-stuffed even by the standards of "New Amsterdam" on NBC.

His scene partner is the equally funny Timothy Omundson. Known for his roles in the long-running series "Psych" and "Supernatural" and the short-lived "Galavant," Omundson suffered a major stroke in 2017. Like Jones, he has continued to work, playing a stroke victim in "This Is Us" and reprising his role as Carlton Lassiter in the recent "Psych" movies.

"Working with Tim was fantastic," Jones says. "I had seen him on 'Psych' and my daughters are big fans. When I told them I was working with him, I became a god in the eyes of my children."

Omundson parries: "As soon as you said you liked 'Pysch,' I knew you were a great man."

The two are speaking via conference call, and despite the speech limitations dictated by their conditions, not to mention the inevitable issues with any conference call, the conversation zings with one-liners in a way that is remarkably similar to their scenes in "New Amsterdam."

"Seriously," Omundson adds, "one of the biggest selling points of this role was that I got to work with this epic Broadway star, and he did not disappoint."

One of Jones' biggest fears when he got the offer was of disappointing the cast and crew; Parkinson's is a degenerative disease and two years is a long time. "But they didn't even ask if I could do it. I've had a hard time learning lines for a while now, but the best thing about TV is that if you mess up, you can do it again."