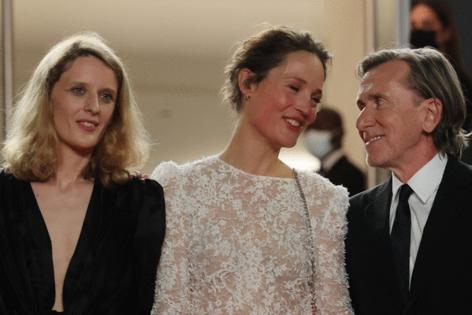 With films full of lacerating emotional insights told with a gentle grace, French writer-director Mia Hansen-Love has emerged as one of the most reliably acclaimed figures on the world's festival circuit. Her new "Bergman Island" is positioned to broaden that appeal even further.

Now playing in theaters and adding a video on demand release Friday, the Cannes Film Festival selection marks Hansen-Love's English-language debut and stars an international cast of recognizable faces. The film also boldly engages with the legacy of Swedish filmmaker Ingmar Bergman, who has been a touchstone for generations.

As the film opens, a couple — Chris (Vicky Krieps) and Tony (Tim Roth) — arrive on the Swedish island of Faro, where Bergman lived, created many of his landmark films and is buried. Both filmmakers themselves, Tony and Chris each hope to get some writing done amid the idyllic and inspirational setting, even as their relationship seems quietly strained.

As Chris struggles with her script, she begins to describe it to Tony and it's also depicted on screen as the story of a woman named Amy (Mia Wasikowska) who rekindles an affair with an old flame, Joseph (Anders Danielsen Lie), when they both attend a friend's wedding on Faro.

The film's crucial final section finds Chris shooting the movie she described to Tony, with Wasikowska and Lie appearing as themselves — she uses her natural Australian accent and he is referred to as "Anders." That sense of what's real and what's imaginary takes further flight into something that playfully and elegantly toys with viewers' expectations and desire for explanations, perhaps even turning a bit mystical as the film refuses to give direct answers.

Hansen-Love's films have long drawn from her life in some way, from a transformative early romance in 2011's "Goodbye First Love" to her brother's career as a club DJ in 2014's "Eden." She visited Faro multiple times over a number of years and wrote the "Bergman Island" script there. She was also in a long-term relationship with French filmmaker Olivier Assayas, including having a child together, so it is natural for audiences to assume that the relationship troubles on screen in some way represent their real-life breakup.

"My film deals with that confusion between fiction and reality," said Hansen-Love during a recent video interview the day after her film played the New York Film Festival. "The way I see it, I'm trying to be completely truthful about it, but it's always a reinterpretation and the form that it takes isn't necessarily faithful to the facts of my life. I think the truth is even deeper. To give you an example, I never went to Faro with Olivier Assayas and it's very surprising because he's a huge fan of Bergman. When I went to Faro, I was alone and I wrote the film on my own.

"And so none of the scenes you can see on the island between Tony and Chris happened to me, the way they happen in the film," said Hansen-Love. "They are all reinterpretation, reinvention. But were they inspired or was I trying to deal with things I had been going through? Yes, certainly. My pleasure as a director is really to transform this experience of mine into a fiction in a way that ultimately it's not my life anymore. It becomes something else. And hopefully something bigger and more universal than my life."

Like Hansen-Love, the character of Chris hates to fly, which is why she behaves so anxiously as she and Tony arrive in Sweden. And, like her creator, Chris finds writing to be an excruciating process that brings out all of her insecurities and vulnerabilities.

"I think I really expressed what the writing process is for me [in 'Bergman Island'], but the funny thing is that the only time where it wasn't like this was when I wrote on Faro, when I wrote that film," Hansen-Love said. "And that's really weird because when I wrote precisely the film where I describe how difficult writing is for me, it was the easiest film for me to write. I think it had to do with the moment of my life, I'm sure, but also with the island and the magic of it. I really believe that the island opened doors for me that could never be opened before."