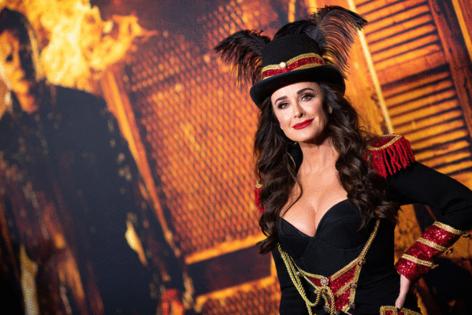 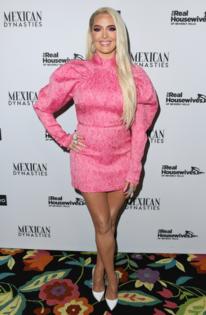 LOS ANGELES — During a meeting earlier this month with the executives behind "The Real Housewives of Beverly Hills," Kyle Richards started bawling. She had, she said, "a total meltdown about the show" she has been part of for 11 years.

Outside of the Bravo reality series, she has a happy life. She and her husband, Mauricio Umansky — founder of the real estate brokerage the Agency — have been married for 25 years. Portia, the youngest of their four children, was just bat mitzvahed this month. She has five dogs, two live-in house assistants and resides in an $8.2 million Encino mansion that once belonged to Smokey Robinson.

And, 15 years removed from her last serious role, on "ER," she's returning to the job that first made her famous as a child star: acting. She has a prominent supporting role in the horror sequel "Halloween Kills," now in theaters and streaming on Peacock, reprising a character she originated in the 1978 genre classic. In December, she and Betsy Brandt will co-lead a Christmas movie for Peacock called "The Housewives of the North Pole." They play two best friends who begin feuding after years of dominating a local house-decorating contest.

Which sounds rather tame compared to the real-life intrigue that has transpired this season on "Real Housewives." And that's what's been getting Richards so upset. Not the drama on show, mind you, but the criticism from viewers who don't like how she's handled said drama.

"It does just feel like too much sometimes, all of the outside toxic stuff," says Richards, 52, trying to explain what led to her "breaking point." "After the meeting, I was texting our group chat with the girls [from the show] and I said, 'Honestly, I feel like sometimes I just can't do this. It affects me too much.'"

It was, of course, only a fleeting moment of hesitation. She says she loves the cast — "I actually adore all the women" — and the crew too much. And she is also keenly aware of how the show has helped her further her Hollywood career. Unlike most of the "Housewives," Richards says she has leveraged her 3.5 million Instagram followers not to launch her own beverage or beauty brand, but to convince casting directors and network executives to take a chance on her.

When "Beverly Hills" began in 2010, Richards was cast alongside her sister Kim. Unlike the other women in the group, they didn't have celebrity husbands or co-own professional sports teams — the siblings' claim to fame was that they were kid actors. Kim was arguably the more recognizable of the two, having been in the 1970s sitcom "Nanny and the Professor" and the Disney movie "Escape to Witch Mountain." But when Kim exited "Housewives" after Season 5, little mention was made of Kyle's childhood acting; more recent viewers would likely be entirely unfamiliar with her resume.

That was the '80s television series "Down to Earth," which Richards joined after Disney's "The Watcher in the Woods," a film she co-starred in with Bette Davis. The youngest of three girls — the eldest being Kathy Hilton, who was featured as a "friend" of the "Housewives" this season — Richards said her mother began bringing her to auditions to follow in her sisters' footsteps.

"They kind of pushed me into it, but I was very shy," she recalls. "I thought every audition was a doctor's appointment. Maybe because the person had on white or something. I'm terrified of doctors, so I would freak out. And I was so shy that my mom thought, 'Let's push her even more to get over this shyness.' But I'm grateful that she pushed me to do that, because I ended up loving it. I had such a positive experience as a child actor, which not everyone can say."