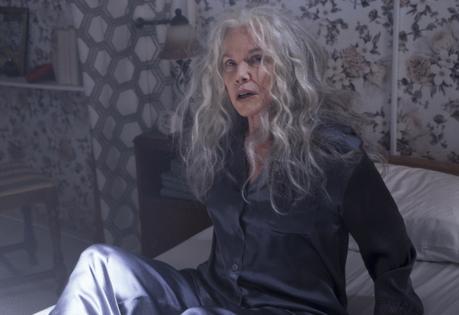 Axelle Carolyn's "The Manor" is the rare horror movie to feature a protagonist over the age of 60. The film stars Oscar nominee Barbara Hershey as Judith Albright, a woman who recently suffered a mild stroke and is moved into a nursing home whose residents are being targeted by a supernatural force.

The gothic horror, written and directed by Carolyn, is one of four films released in the second installment of Amazon Studios and Blumhouse Television's "Welcome to the Blumhouse" anthology, now streaming on Prime Video.

"It was a really hard script to find a home for because we're talking about ageism," said Carolyn. "It's incredibly difficult to get a movie made if your lead is a woman in her 70s. A lot of places really liked the script but then wanted us to replace it with a mental institution or change it somehow so that we would get away from the subject matter."

"The Manor," along with the other three films in this slate of Blumhouse films — "Madres," "Black as Night" and "Bingo Hell" — was made on a shoestring budget as part of the production company's mission to uplift emerging filmmakers from diverse backgrounds.

"I like that they're supporting and giving young filmmakers like Axelle a chance," said Hershey. "That's something that they're doing with their ever-growing power and I applaud that."

"It started out much more of a drama, but you kind of have to fit into a certain model with the movies we're making here," said Carolyn. "There's certain expectations that are placed on it that the movie kind of has to conform to. I've done a lot of independent films; I have not worked on anything that could be considered studio level, so that was my first experience navigating diplomacy and the different expectations that companies might have for your movie. It was a learning curve, but I'm very grateful I got to make this movie without changing the nature of it."

The Los Angeles Times caught up with Carolyn and Hershey to discuss ageism, society's mistreatment of the elderly and exactly what makes a nursing home so scary.

Q: What made you want to write a horror film centered around an older woman? Where did the initial seed of the idea come from?

Axelle Carolyn: A bunch of different elements. The first was seeing people in my family end up in nursing homes. I think going into a nursing home and seeing the reality of aging — you confront your own mortality in some ways. And the way that I tend to channel difficult emotions — because I'm such a horror fan and because that's the way that I write — is to come up with supernatural stories.