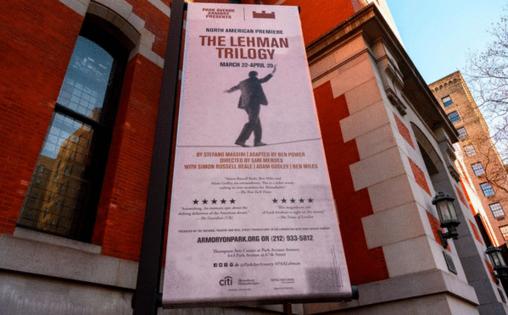 NEW YORK — If you head over to Wikipedia to remind yourself of why the financial services firm known (technically) as Lehman Brothers Holdings collapsed into the largest bankruptcy in American history in 2008, impacting everything from the value of your house to the security of your job, you’re greeted by a bold-faced warning.

“This section may be too technical for most readers to understand.”

Unknowingly, those anonymous editors say it all, right there. Don’t they?

Lehman Brothers fell apart amid the subprime mortgage crisis. They were over-leveraged, overextended, over-engorged and, most importantly, overrated. America didn’t see it coming because few people, even the paid professionals, understood precisely what they were doing there in their shadowy Gotham world of shoveled mortgage tranches and opaque derivatives and naked short-selling.

But if you walk through the doors of the “The Lehman Trilogy,” which finally opened at the Nederlander Theatre on Broadway Thursday night after falling to the pandemic after just a couple of preview performances in March 2020, rest assured that you will understand. Much better than you have before.

That’s partly because this gripping piece of docudrama — the three-act script is by the Italian writer Stefano Massini as adapted by Ben Power and directed by Sam Mendes — is so precise in its storytelling. It’s partly because the Broadway cast is made of three masterful British actors in Simon Russell Beale, Adrian Lester and Adam Godley, playing successive generations of Lehmans running the firm as it morphed from a tatty fabric store in Montgomery, Ala., to a glittering titan of Wall Street.

But it’s mostly because this show, an import from Britain’s National Theatre and far and away the best thing I’ve seen on any stage since before the start of the pandemic, is determined to explore the story of the Lehman Brothers from myriad angles.

Its central achievement, to my mind, is that it both gives a nod to capitalist American ingenuity, to the ability of three German Jews to come here with nothing and build an empire born of shrewd ideas and anticipating the needs of the customers, while pointing out, time and time again, that all winners beget losers.

Most moralistic business narratives about the fiscal collapse of 2008 are preoccupied with how American capitalism went from manufacturing, buying and selling actual things to dealing in abstract notions like the packaging of debt. And since that entire system required the maintenance of belief in the system, that led to catastrophe once that requisite confidence evaporated.