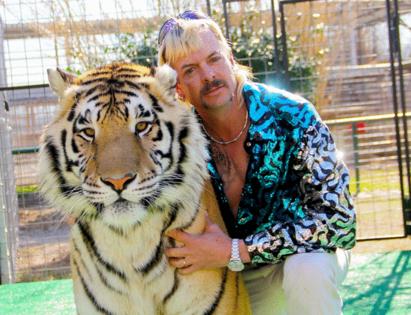 Netflix is going back into the lion’s den.

After “Tiger King” captured the nation’s attention for a few weeks at the beginning of the pandemic, the streaming service is trying to reignite those conversations with “Tiger King 2.”

The hit “will return to Netflix for more madness and mayhem” sometime this year, the streaming service announced Thursday.

No other details were provided, likely because a non-insignificant number of the cast members are currently in jail.

The original docuseries, which premiered in March 2020, dug its claws into the world of big cats and the humans who befriend them, including the infamous Joe Exotic and conservationist Carole Baskin.

If that weren’t enough “Tiger King” for you, Peacock is also working on a scripted miniseries with Kate McKinnon starring as Exotic.

Netflix is doubling down on true crime, also announcing several other docuseries Thursday, including “The Puppet Master: Hunting the Ultimate Conman,” a three-part series about “one of the world’s most audacious conmen who was convicted in 2005 for stealing fortunes and destroying multiple lives,” “The Tinder Swindler,” about a prolific conman who posed as a billionaire playboy on Tinder, “Trust No One: The Hunt for the Crypto King,” about the suspicious death of cryptocurrency multimillionaire Gerry Cotten and the investors who claim he stole $250 million, and “Bad Vegan,” about celebrity restaurateur Sarma Melngailis who loses millions when a conman “convinces her that he can expand her food empire and make her beloved pit bull immortal.”