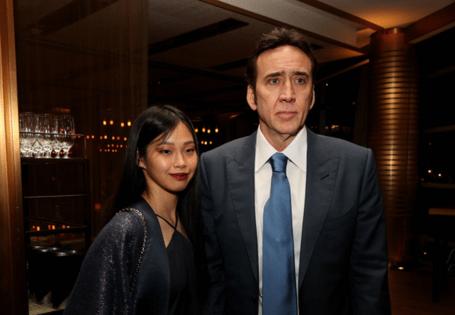 Nicolas Cage is fully in on the joke in "Prisoners of the Ghostland," a deliriously wacked-out but brutally dull Japanese neo-Western built only for members of Cage's rabid cult of bad movie fetishists. No one else need apply.

Cage plays Hero, a bank robber who is sent into a toxic wasteland to retrieve one of the sex slaves of the Governor of Samurai Town, played by Rob Zombie regular Bill Moseley. Simple enough.

Ah, but there's a catch: Hero is outfitted in a black leather suit strapped with explosive devices — including two in his, er, private area — that will detonate if he mistreats her in any way, or if he doesn't get to her in the three days he's allotted.

Cage yells — there's a line he screams about his testicles that's sure to get a reaction — makes boogeyman faces and does just about everything but look directly into the camera and wink to let you know that yes, he gets it, and he's not only in on the joke but he is the joke, therefore diffusing the joke. And that's a lot of cognitive meta work to get through just to justify something that seems as though it was created by a Nic Cage meme generator to yield a few reaction gifs.

The director here is Sion Sono, the weirdo Japanese auteur whose sensibilities are aligned with that of modern day Cage, and together they make a self-conscious shoulder shrug of an in-joke that isn't designed to be taken seriously by anyone. Mission accomplished.

But even given that low bar, it all feels rather pointless and self-serving, an empty exercise in guffawing inside of an echo chamber. If no one else can hear the laughter, does it even matter?

'PRISONERS OF THE GHOSTLAND'

Where to watch: Now in theaters and VOD