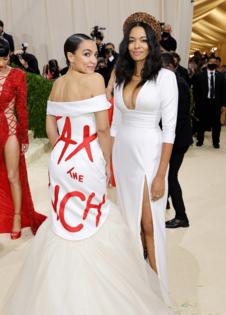 U.S. Rep. Alexandria Ocasio-Cortez ruffled lots of feathers with her 2021 Met Gala dress — and not the fashionable kind.

After some called the New York Democrat a hypocrite for condemning wealth inequality at the lavish, star-studded red-carpet event, the New York congresswoman defended her decision Monday to attend the gala wearing a floor-length white gown with “Tax the Rich” written on the back in bold, red letters.

“The medium is the message,” Ocasio-Cortez captioned an Instagram photo of herself and designer Aurora James showing off their controversial collaboration. “The time is now for childcare, healthcare, and climate action for all. ...

“And yes, BEFORE anybody starts wilding out — NYC elected officials are regularly invited to and attend the Met due to our responsibilities in overseeing our city’s cultural institutions that serve the public. I was one of several in attendance.”

The far left-leaning politician added that she was “proud to work” with James, an activist and “sustainably focused Black woman immigrant designer” who began her fashion career at a flea market in Brooklyn; James also responded to the backlash on social media.

“Fashion at its best is a tool to express ourselves, share our cultural identities and challenge ideas and norms,” James wrote Tuesday on Instagram.

“As a Black woman, who also happens to be a fashion designer, activist (@15percentpledge) and small business owner — working with @aoc to create this dress and this message at this particular moment in time was incredibly important.”

James, the founder of environmentally conscious clothing brand Brother Vellies, is also the creator of the 15 Percent Pledge, which challenges companies to “pledge 15% of their shelf space to Black-owned businesses.”

“With access comes great opportunity,” she continued in her post. “We can never get too comfortable in our seats at the table once they’ve been given. We must always continue to push ourselves, push our colleagues, push the culture and push this Country forward. Even when it’s uncomfortable. Fashion is changing, America is changing.”

Still, Ocasio-Cortez’s choice to urge the U.S. government to “Tax the Rich” at a haute couture party hosted for the rich and by the rich didn’t quite land with skeptics who doubted the efficacy of the righteous statement.

While scrutinizing the Bronx-born legislator, several noted the astronomical cost of a Met Gala ticket, priced at $30,000, according to Newsweek. A table inside the extravagant ball — which doubles as an annual fundraiser for the latest exhibit curated by the Metropolitan Museum of Art’s Costume Institute — is reportedly worth at least $275,000.

Though the entry fee was waived for Ocasio-Cortez, the excessive price of admission still irked and raised questions among her critics.

“One of the most disgusting things I’ve ever seen,” tweeted activist @hexthekyriarchy. “While constituents she failed are being evicted or wondering how they’re gonna eat tonight, @AOC out here living large at the #MetGala. Wearing a dress that says #TaxTheRich but will do nothing to make it a reality.”

Speaking of the policymaker’s fans, others showered Ocasio-Cortez with praise and support, arguing that her calculated move to shift the Met Gala conversation from luxury style to class disparities was brilliantly executed.

“It’s truly maddening to watch people on the left and right attack AOC for being at the Met Gala,” tweeted bestselling author Frederick Joseph. “She is doing what she can to help change a very broken world and system. Let her enjoy her life. The purity nonsense from people who oftentimes are doing nothing is insufferable.”

“Everyone is talking about ‘Tax The Rich’ because of AOC’s stunt at a gala full of the people she was targeting, where she was invited for free in a free dress … to back up her actual legitimate work on this issue in Congress,” wrote actor Jameela Jamil, “and you’re all angry/confused as to why she did it?”

The Scooby gang comes together for a "Friends"-like reunion that gets interrupted by a ghost terrorizing the Warner Bros. Studios. Too bad the menace is a lot less frightening than Ugly ...Read More