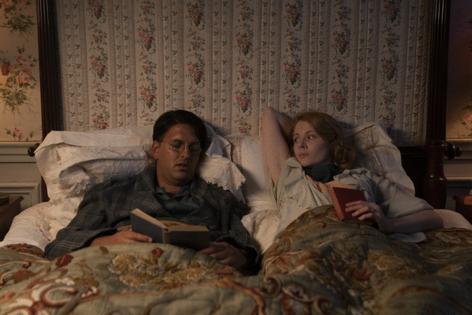 Emily Mortimer, the actor, has written and directed and plays a supporting part in a lively adaptation of Nancy Mitford’s 1945 novel “The Pursuit of Love,” a tale of two cousins set between the World Wars. It premiered Friday on Amazon Prime.

The novel has been adapted for television twice before, in 1980 and 2001, in combination with (and under the name of) Mitford's following novel, "Love in a Cold Climate," which takes place in the same time frame and features the same narrator, Fanny Logan, splendidly played here by Emily Beecham. The new production, which sticks to the first book — with a few importations from the second — is the grandest of the three, the most stylish, whimsical, energetic, broad and modern; it is a case of 2021 looking back 80, 90 years, with a contemporary opinion about how things were, and are.

Mitford's (partial) alter ego is not her narrator, but her narrator's subject, Fanny's cousin Linda Radlett (Lily James), "a wild and nervous creature full of passion and longing," in a rush to live and going about it wrong. The novels took details from Mitford's own famously unusual, semi-toxic family, copious enough to accommodate fascists, a muckracking journalist and a duchess among its seven siblings. (Nancy Mitford was none of those.) Their father, whose literary reconstruction, Fanny's Uncle Matthew, played here by a thundering Dominic West, was a blustery, violent xenophobe who didn't believe women should be educated and is pictured hunting his children like foxes for fun.

Fanny is raised by her Aunt Emily (Annabel Mullion) after her mother — "too beautiful and gay to be burdened with a baby," referred to only as "The Bolter" and played by Mortimer — left her father and town; this gives her the advantage of schooling denied her cousins. For much of the opening episode, which goes back to Linda and Fanny in their middle teens, and intermittently thereafter, Mortimer borrows Wes Anderson's toy-theater, storybook aesthetic, leaning on narration; adopting a tightly composed, frontal, formal look; slicing in documentary footage and photographs and newspaper mock-ups; and superimposing titles in a handwritten style to identify places and people, including people identified only as "Important Person," "Boring Don's Wife" or "Bitchy Ladies at the Ritz." Music — including songs by T. Rex, Cat Power, Sleater-Kinney, Brian Ferry, New Order, Marianne Faithfull, Joan Armatrading, Nina Simone, Juliette Greco — has been chosen for its emotional power rather than its period aptness. That is not to say it's historically unstrung along the lines of "The Great" or "Bridgerton" or Sofia Coppola's "Marie Antoinette"; generally speaking, it stays put within its period.

In the novels, the Mitfords' less pleasant aspects (sister Diana left her husband for British fascist leader Oswald Mosley; Unity, who was cozy with Hitler, shot herself unsuccessfully in the head after Britain declared war on Germany) are massaged into a comic portrait of country-house eccentrics, a breed familiar from Wodehouse and Waugh. (Linda does marry into a family who think the Nazis are fine, and will later have a brush with communism, before … well, that's the story you may be about to watch.)

Without messing with the plot, Mortimer has added material to to draw a distinction between Linda's impulsive nature and Fanny's more practical one and at the same time to make Fanny less of an observer and more a participant, questioning her choices in light of her friend's more daring (if not necessarily satisfactory) life, with existential and domestic crises of her own. And she brings the Bolter in now and again to blithely disparage her abandoned daughter: "Such a mistake to be friends with girls who are more beautiful than one is, so dispiriting." (Let it be said that Beecham is no less beautiful than James, however they dress her, and not being saddled with a character everyone agrees is extraordinary, has the room to create a more shaded person.)

Mortimer also intensifies the women's relationship, making it the main thrust of the story. "You are the most incredibly alive person I've ever met," Fanny tells Linda. "I'm lost without you," Linda tells Fanny. They have confidential conversations in the bathtub, in bed, drunk in a powder room, in a cupboard under the stairs. None of the male characters really seem worthy of them, even the ones who might actually be, but they are made for each other, in their complementary way. Everything that keeps them apart is a sort of distraction.

Fanny's husband, Alfred (Shazad Latif), an abstracted academic who has little presence on the page, is blown up into a bit of a Dull Husband cartoon on the screen, warning that glasses can leave rings on a table and falling asleep as she wonders aloud whether she might be a "bit of a prig," and speculating that, unlike her mother, the Bolter, "I'm a tremendous Sticker." Observations on the lot of the wife of the Oxford don are flown in from "Love in a Cold Climate" to make Fanny's life sound like more of a predicament; inserting a simple "I suppose" into her description of her marriage and home as "that refuge from the storms and puzzles of life which I had always wanted" introduces an element of doubt. Some reflections on the "pinpricks" of daily life are made the meat of an argument, and there is certainly enough wiggle room in Mitford's line, "Alfred and I are happy, as happy as married people can be," for the adapter to regard it as trouble. But some care has been taken to balance the disconnection with reconnection.

It's a large, well-chosen cast, able cast, in big and small parts alike, but mention must be made of Andrew Scott, forever to be described as the hot priest from "Fleabag," as Lord Merlin, an arty neighbor who stages surrealist plays, puts diamond collars on his whippets, dyes pigeons different colors and becomes something of a mentor to Linda; and of Dolly Wells, who plays Aunt Sadie (Linda's mother) and was Mortimer's co-writer and co-star on the excellent, fictionally self-referential HBO comedy "Doll & Em."

There's room to argue how much this is an interpretation of the book and how much an adaptation — it's not a radical rethink, or without textual justification, but Mortimer's screenplay is at times less concerned with the choices these women make as individuals than with the choices women are allowed to make as a class. "Happily married or unhappily married, that's the choice if you're a woman," Mortimer has Fanny say; paraphrasing Simone de Beauvoir, Linda observes, "Your wings get clipped and then everyone's so surprised when you don't know how to fly." And if anyone has missed the point, as things are drawing to a close, she gives Aunt Emily, watching her grand-nephews, a message for the future: "Let's hope that in years to come these boys' granddaughters can be more than just a Bolter or a Sticker and decide who they are, irrespective of who they marry."

"Someone should write a book about me," Linda will declare, "and give it the most tremendously happy ending." The implication — the line is Mortimer's — is that Fanny is that someone, and that, in narrating "The Pursuit of Love," she will have done just that. The series' end, which is the book's, is told as quickly and simply as on the page, with great elegance. What has been diverting and amusing becomes suddenly moving at the last, shining a light back over all that has gone before. Novelist and screenwriter alike give the last line to the Bolter, but, as if honoring Linda's request, Mortimer leaves them all laughing.

‘THE PURSUIT OF LOVE’

Rating: 13+ (May be unsuitable for children under the age of 13)

Where to watch: Premiered Friday on Amazon Prime Video