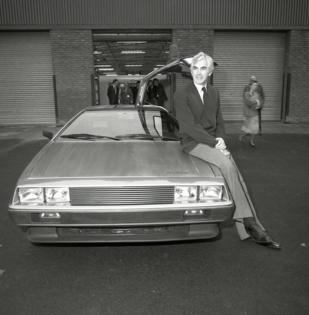 A sympathetic devil posing next a DeLorean? Even the man whose name is on the vehicle might have appreciated the metaphor of an Instagram photo shared last week by actor Tom Ellis, who plays the suave title character in "Lucifer."

In a sneak peek of the sixth and final season of the Fox-turned-Netflix TV series, a dapper Ellis is shown leaning suavely against the iconic gull-winged car. "Good things are coming," posted Ellis.

If only that had been true for the 1981 DeLorean DMC-12, which was hyped as an automotive game changer, but resulted in one huge scandal that left a wake of destruction in its path.

Forty years after the first one rolled off the assembly line, the automobile that bears John DeLorean's name is best known as the time-traveling vehicle of the "Back to the Future" movies.

DeLorean himself, who died in 2005, is still a complex riddle who continues to fascinate filmmakers. The latest effort to explore the psychological demons of the disgraced automaker is a three-part documentary series titled "Myth & Mogul: John DeLorean," which arrives Friday on Netflix.

The bare bones of the story are familiar to those who were alive during the 1970s, the heyday of DeLorean's visions of grandeur, and the 1980s, when he was at the epicenter of what was dubbed the trial of the century.

After a meteoric career as a muscle car pioneer at General Motors in the 1960s, DeLorean launched a company to make one vehicle, the DeLorean DMC-12, billed at the time as a fuel-efficient, environmentally friendly, durable and impossibly hip ride.

It seemed too good to be true, and it was. Desperate for money to keep his dream afloat, DeLorean was arrested in 1982 after a government sting operation and charged with trafficking cocaine.

He was acquitted in that trial and a subsequent one on charges of skimming $9 million from investors. Still, his reputation was shattered, and for DeLorean, his chroniclers agree, image was everything.

In 2019, two movies attempted to tell DeLorean's story in artistically creative ways. "Framing John DeLorean" was an intriguing hybrid that combined a traditional documentary with dramatizations of real-life events involving DeLorean, who was played by Alec Baldwin.