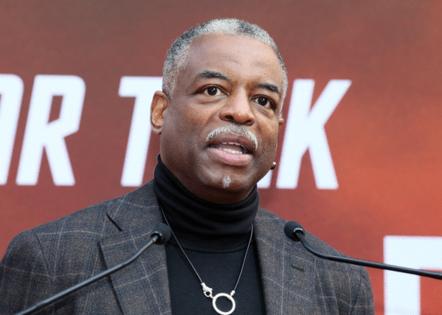 Despite decades of experience in the entertainment industry as a beloved TV host and actor, LeVar Burton was more than nervous to begin his long-awaited stint as guest host of “Jeopardy!”

“I was absolutely petrified,” Burton said in a promotional video for the hit quiz show, whose first episode hosted by Burton aired Monday. “And I don’t know that that feeling ever went away.”

After dropping hints and outright campaigning to succeed the late Alex Trebek as emcee of the prestigious TV institution for years, Burton finally makes his debut behind the famed studio lectern during this week’s “Jeopardy!” programming.

“My standard of excellence is so intense that my initial approach was to try and be as good as Alex was,” Burton told previous “Jeopardy!” guest hosts Robin Roberts and George Stephanopoulos on Monday’s installment of “Good Morning America.”

“Of course, I realized right away that that was an impossibility. The man had 37 years to perfect his mastery.”

From 1983 to 2006, Burton served as host of the popular PBS series “Reading Rainbow,” which encouraged children to read through various modes of storytelling. During his “Reading Rainbow” tenure, Burton collected several Emmy Awards and a Peabody Award for his influential work.

As Burton’s highly anticipated “Jeopardy!” moment approaches, more than 257,000 fans — who grew up watching the revered performer on “Reading Rainbow,” “Roots” and other seminal productions — have signed an online petition nominating him as permanent host of the long-running competition program.

In recent years and months, Burton has repeatedly stated his aspirations to take up the coveted mantle on social media, in interviews and in correspondence with the show’s producers. In other words, he and his loyal fandom are not messing around.

“I am the beneficiary of amazing grace,” Burton told “Good Morning America.” “I think [the mounting online support] has something to do with the fact that this generation of adults who grew up on ‘Reading Rainbow’ feel like I have made an investment in them, and they are returning the favor.”

This week won’t mark the first time Burton has taken the “Jeopardy!” stage. In 1995, the Grammy-winning narrator raked in a whopping $14,500 for the Somalia Foundation as the winner of “Celebrity Jeopardy!”

This time around, Burton is raising money and awareness for Reading is Fundamental, an organization that delivers thousands of books to children each year.

“This is what I’ve been doing my entire career,” he said. “For 45 years, I’ve tried to use the medium of television to do more than simply entertain.

“I know that we have the opportunity — when we do it with consciousness — to inform, to enlighten, to educate, even uplift ourselves with the stories that we tell one another. And I see ‘Jeopardy!’ as absolutely in the sweet spot of that Venn diagram.”