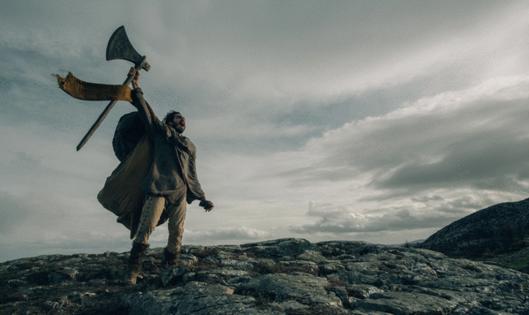 When we first spy Dev Patel tumbling out of bed in “The Green Knight,” after a night with his sweetheart played by Alicia Vikander, the movie’s title seems to be referring to him — Sir Gawain, that is — and not the hulking, mossy-toned forest creature who later tests the young man’s mettle.

Gawain, King Arthur’s impetuous nephew, is one of the Knights of the Round Table. Though he’s ripe for “adventure, brave and bold,” up until now life in Camelot has been a royal slacker’s breeze. The strategy behind writer-director David Lowery’s quietly arresting medieval fantasy is simple: Gawain is a vessel, waiting to be filled with life’s challenges.

The wonderful thing about Patel in this role is simple, too: He’s an open book on camera, a natural audience conduit between our century and the movie’s absorbing vision of an earlier one, far away.

This is a bleak midwinter’s tale. Early on, as the story’s Morgan le Fay figure (Sarita Choudhury, a spellbinder even when she’s not casting spells) suggests that she’s the one calling the shots, a rather desiccated King Arthur (Sean Harris, vaguely sinister), Queen Guinevere (Kate Dickie, equally intense) and the Camelot Roundtable regulars are visited by the Green Knight (Ralph Ineson, Dickie’s costar in the superb witchcraft chiller “The Witch”).

Resembling a tree trunk on horseback, the Green Knight proposes a nutty sort of a contest. He’ll gladly be beheaded by a valiant knight if the axe-wielder agrees to seek out the Green Knight in his forest lair one year later, on New Year’s Day, and risk his own beheading. Gawain accepts the challenge. The Green Knight’s head plops to the floor. Then the headless but otherwise uninjured adversary reaches down, picks up his noggin and tells the stunned Gawain that he’ll see him next year.

“The Green Knight” follows Gawain’s episodic journey to make good on the bargain. Much of the material comes from the 14th century poem, author unknown. Lowery reorders and invents at will. The key test of his character en route is from the poem: It’s an encounter with a lord (Joel Edgerton) and his lady (Vikander again, memorably) wherein Gawain must pass a resistance test or two and remain Round Table-worthy. Lowery’s script heightens the involvement of the women in the story, and while there are moments in “The Green Knight” when motivations and relationships become a bit muddy, well, it’s a muddy world quite literally.

Filming in Ireland, cinematographer Andrew Droz Palermo finds an astonishing variety of natural and human-made light to help tell the story. The effects work is both impressive and sparing, ranging from digital creations to old-fashioned matte paintings. (As Terry Gilliam said in “Monty Python and the Holy Grail”: “It’s only a model.”)

Lowery has an unusual gift for forest-shrouded wonders, as proven by his beguiling live-action “Pete’s Dragon” for Disney. (His next project is also for Disney: “Peter Pan & Wendy.”) Serving here as his own editor, the director pays close attention to that extra beat or longer-than-usual take, by which we’re pulled into a world and a rhythm not like most movies. The movie’s more ruminative than exuberant. It’s also fully invested in making its own kind of magic, on its own time.

The casting’s splendid, and supporting players such as Barry Keoghan (as a feckless highwayman) add all sorts of spice. Largely nonverbal and reactive to events, Patel serves the film, valiantly. Lowery creates a spiritual cousin to Shakespeare’s Prince Hal, torn between taverns and common folk and his highborn destiny. There’s a lot here, either on the surface or bubbling beneath it. In its Christianity vs. paganism square-off, “The Green Knight” lands on a note (and an event) very different from the poem’s.