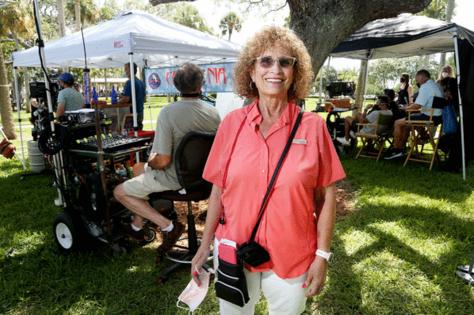 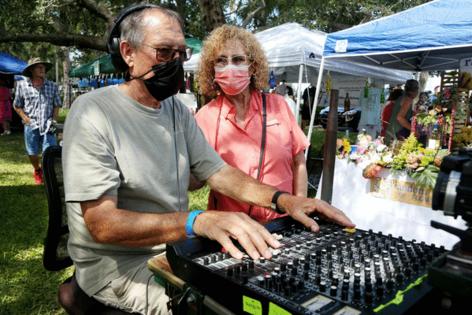 DUNEDIN, Fla. ― Asked if she is a romantic, Elayne Schneiderman Schmidt stoically replied, “I guess.”

But when asked about her husband, Schmidt’s business-like demeanor softened.

“He is the man of my dreams,” the 64-year-old Citrus County resident said.

They met via online dating, he promised on their first date that he was going to marry her, and they wed eight weeks later to the day.

“I am romantic,” Schmidt then said more definitively.

Schmidt is bringing that romance to Tampa Bay film sets.

She has produced two Hallmark movies in the area and a third begins shooting soon. And, through the end July, Schmidt is in Dunedin on the set of "A Taste of Love," a romantic film featuring "Cobra Kai’s" Martin Kove.

It is not a Hallmark movie, but Schmidt is confident it will find a home on a prominent streaming service.

“I shoot all over the state,” said Schmidt, whose producer credits include "The Florida Project" and Academy Award-winning movie "Moonlight." “But I prefer Tampa Bay.”

“They need to be bright and alive,” she said. “They need clear and crisp locations. Tampa, Clearwater and St. Petersburg lend themselves to that.”

Lincoln Lageson, who estimated he has produced more than 70 romance films including the two local Hallmark movies and "A Taste of Love" alongside Schmidt, echoed that sentiment.

“There are no bad angles here,” said Lageson, who will work on the third local Hallmark movie too. “Every direction you shoot, it’s going to be beautiful. It’s romantic.”

He credits Schmidt for recognizing that Tampa Bay is a good fit for such movies.

Actually, Schmidt laughed, she initially recognized an option for a short-notice project. Hallmark reached out to Schmidt in early 2019 to produce a movie. Filming needed to begin in four weeks.

So Schmidt reached out to the Hillsborough and Pinellas film commissioners with whom she had a relationship from past movies she produced here, such as "Sex Ed" starring Haley Joel Osment that shot on both sides of the bridge in 2013.

The film commissions quickly helped secure locations and offered their production incentives that provide up to 10 percent back on what is spent within their counties.

“It went so well, we wanted to do another Hallmark here,” Schmidt said.

Hallmark, she said, “fell in love” with the area, and wanted to make a third movie here in 2020, but needed a script.

She reached out to Tampa-based production company Digital Caviar. They wrote "A Taste of Love" about an out-of-work television chef who returns to her hometown to find her family’s multi-generational restaurant is up for sale because it can’t compete with contemporary cuisine.

The pandemic temporarily shut down the movie industry before a deal with Hallmark could be sealed.

Digital Caviar met with Pinellas film commissioner Tony Armer to discuss options for filming it on their own. On Armer’s advice, the Pinellas County Commission provided Digital Caviar a $500,000 production incentive if they tweaked the script to double as a commercial for Pinellas tourism by including specific locations and dialogue that promote reasons to visit.

Meanwhile, production started again and Hallmark greenlit "South Beach Love," about an American chef and a Cuban chef who meet and fall in love against the backdrop of planning a quinceanera.

It will be shot in the area and production could begin next month.

Added Armer about Schmidt, “I couldn’t be more grateful that she fell in love with St. Petersburg and Clearwater and wants to bring projects here. We’re lucky to have her on our side.”

Schmidt said it took a “little bit of luck” for her to break into the film industry.

The Queens, New York, native was 20 years old and attending Florida International University in Miami for a theater and psychology double major when a friend asked for a favor. She was a production assistant on a commercial featuring Reggie Jackson and needed Schmidt to bring wardrobe from the dry cleaner to set.

“While there, they offered me $50 to stay and work for the day as a production assistant,” Schmidt said. “They liked me, kept calling me for more work, and that led to work on "Miami Vice" as assistant to Michael Mann,” the executive producer. “That led to other things, and here I am.”

Those “other things,” according to IMDB.com include production manager on sci-fi movie "I Am Number Four" and production coordinator on ’90s hit "The Bird Cage."

“It takes hard work” to make it in the film industry, she said.

Work days can run 16 hours for those on the production side, she said, and there are weeks when she works all seven days.

That hectic schedule once had Schmidt wondering if she’d find love.

“It is hard for someone who works nine to five to understand the lifestyle,” she said.

Schmidt was production supervisor for the George Clooney-led drama "Up In The Air" in 2009 when she met her husband, Ron Schmidt.

“Online dating was perfect,” she said. “I didn’t know how to flirt, so I’d have a day to come up with suave answers.”

They chatted online for weeks, she said, before their first date, “so, by then we already knew we liked each other. When we met, the chemistry was strong.”

She took his first-date marriage proposal as a joke, but he kept at it.

Six weeks later, she said yes, and they married two weeks after that.

“He understands and accepts what my job demands,” she said. “He has one of the best senses of humor and keeps me laughing through all the trials and tribulations.”

It sounds like a Hallmark plot: Hardworking movie producer who has given up on love finds romance online.

Schmidt laughed at the notion.

“I believe in happy endings,” she said. “My life is all about happy moments.”