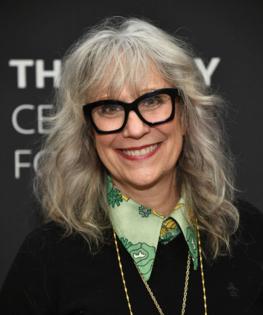 At least in the public imagination, Jon Stewart is the person most responsible for “The Daily Show’s” improbable rise. He’s the visionary host who transformed the late-night show, once considered Comedy Central’s answer to “SportsCenter,” into a powerful force in American politics, a launchpad for a new generation of comedy talent and, for many, a trusted source of information.

But the Great Man Theory of “The Daily Show,” which also includes Stewart’s predecessor and inaugural host, Craig Kilborn, and successor and current host, Trevor Noah, overlooks the contributions of two women essential to the series’ success: its creators.

The story of one of the most influential programs of the last 25 years can be traced back to the day, circa 1994, when TV producer Madeleine Smithberg and comedian Lizz Winstead moved into the same building on West 20th Street in Manhattan, a brownstone where Jack Kerouac had written some of “On the Road.” When given the opportunity to develop a late-night show on a shoestring budget for what was then a cable backwater, the neighbors-turned-friends created an enduring and surprisingly adaptable new form of satire that remains ubiquitous in late-night TV.

“It’s astounding how many people don’t know that two women created ‘The Daily Show,’” says Winstead, who gathered with Smithberg and several original correspondents for a virtual reunion this week. “Madeleine and I did a lot of work to lay out this cool show. It exists for a reason — because we worked for hardly any money to make it happen.”

Doug Herzog, who commissioned the show while president of Comedy Central, agrees: “They put this thing on the air, they brought it to life, they nurtured it. There’s obviously no ‘Daily Show’ without Madeleine and Lizz,” he says. “This was a show led by two women at a time when late night was a boys’ club.”

Back when they became neighbors in 1994, Smithberg was producing“The Jon Stewart Show,” a quirky late-night show that had started on MTV before moving into syndication. At the time, Stewart was a sharp young comedian best known for losing the “Late Night” hosting gig to Conan O’Brien.

Smithberg recruited Winstead, a stand-up comedian who specialized in politically charged material, to work for her as a segment producer. “The Jon Stewart Show” was soon canceled, going down in actual flames when Marilyn Manson started a fire onstage.

But Smithberg and Winstead were on to their next idea: a scripted series, inspired by “The Larry Sanders Show,” set behind the scenes of a fictional cable network.

They pitched the idea to Herzog. At the time, Comedy Central was “a network in search of an identity and an audience,” he says. It had a few original productions, including the panel show “Politically Incorrect” and the animated series “Dr. Katz, Professional Therapist,” but other than that it was mostly “Absolutely Fabulous” reruns and old Gallagher specials. When Bill Maher unceremoniously decided to take “Politically Incorrect” to ABC, Herzog had a void to fill.

Herzog thought the “Larry Sanders"-style show Smithberg and Winstead were developing would be too expensive to make. Instead, he urged them to focus on what he’d started referring to as “The Daily Show” — a nightly broadcast that would function as the network’s home base. His fuzzy idea was for something “part ‘SportsCenter,’ part Howard Stern, part ‘Weekend Update’” featuring someone at a desk, he says.