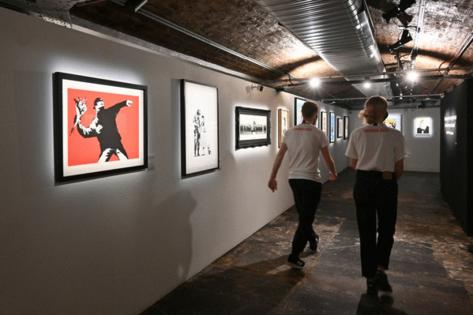 CHICAGO — “The Art of Banksy” will open Aug. 14 on State Street, according to an announcement Friday from presenter Starvox Entertainment.

That’s more than a month late for the exhibit and a recent change in venue — the show of Banksy work had been announced for the Epiphany Center for the Arts in the West Loop, but according to emails to the Tribune in mid-July from both the venue and show producers, lease terms for that space fell through. “Art of Banksy” tickets first went on sale in May for a July 1 opening; those ticket-buyers will be notified of the change in venue and those with tickets earlier than Aug. 14 will be contacted to reschedule.

Banksy is the famous and famously anonymous street artist whose graffiti-influenced stencil work has a political bent, particularly with images titled “Flower Thrower,” “Rude Copper” and “Girl with Balloon.” The roughly 80 pieces in the show will be canvasses, screen prints, sculptures and one-off pieces dating between 1997 and 2008. Starvox promises all works will be Banksy originals, donated by collectors.

“The Art of Banksy” was most recently seen in Toronto. Starvox previously put on “Immersive Van Gogh” in Old Town.

The new River North venue is at 360 N. State St., a 45,000-square-foot fourth floor space above the still-closed Museum of Broadcast Communications. (The museum is slated to reopen in August.)