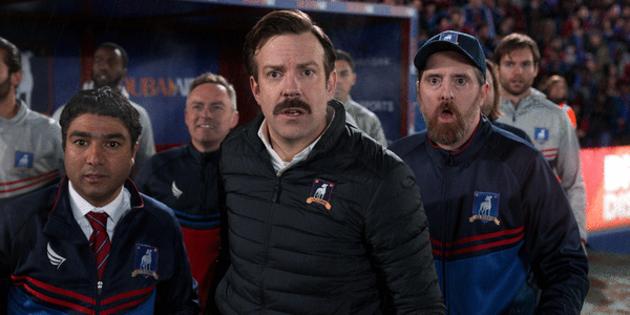 It’s a sport the Chicago native had little knowledge of — or interest in — before moving to Amsterdam in the late 1990s to join the Boom Chicago sketch comedy troupe. Jason Sudeikis, another expat from the Chicago comedy scene, would join him at Boom Chicago not long after, and between shows the two would convene to the green room to play FIFA on PlayStation, planting the seeds for a TV series that scored 20 Emmy nominations last week, including one for Hunt as supporting actor.

The Apple TV+ comedy is back for a second season on Friday, this time with Sudeikis’ aw shucks American football coach better acclimated to his job as the manager of an English soccer team. By his side, as always, is his semi-taciturn, surprisingly offbeat right-hand man, Coach Beard, played by Hunt.

Ted’s big-hearted embrace of the world contrasted with Beard’s weirder, quieter approach would first come to life in a 2013 promotional spot the pair made for NBC’s coverage of Premier League Football, as the sport is known outside the United States. “In that first spot, when I’m holding up flashcards to help him learn, was exactly what I was doing when Jason came to Boom Chicago,” said Hunt. “I was always ready to do that. Any time I’m at a bar, I’m hoping somebody asks me about the offside rule. Give me four bottles of beer and one bottle of ketchup and I’m going to explain this to you so well because I love explaining soccer.”

Soccer wasn’t part of his life growing up. He described his childhood in Chicago as nomadic.

“My mom and dad were very young when they had me,” he said. “They were 20 and 19 when I was born. My dad had just come back from Vietnam, and I think he had PTSD that he never treated, in that sort of macho-denial way. So they were divorced by the time I was 2, and my mom tried to raise me and my younger sister by herself. That proved very taxing, so there was a lot of moving around.” He and his sister lived with his grandmother for a time. When his mother remarried, the family finally settled in Lakeview.

It was an eighth grade field trip to Second City in 1987 that set Hunt on his path as an actor.

“The show was called ‘Jean-Paul Sartre and Ringo.’ Bonnie Hunt was in the cast and she made the biggest impression on me. That show just blew me away. I couldn’t believe these people were doing this. So that had a big effect on me. But also the same year, on another field trip, I saw ‘A Midsummer Night’s Dream’ at Court Theatre, and I couldn’t believe how much I loved it. That’s when I started doing school plays and started an improv group.”

He attended high school at Kenwood Academy in Hyde Park — “incongruously, for someone who lived on the North Side” — and then studied theater at Illinois State University, before returning to Chicago, where he was one of the founders of a theater company called Wax Lips.

At the same time, he was also performing improv at ComedySportz, which is where he and Sudeikis would first meet. “One day at the theater, this Volvo station wagon shows up and two guys get out; they were ComedySportz guys, too, from Kansas City. One of them was Jason, and he was hilarious and immediately made an impression. Like, this guy’s for real. So we would see each other off and on in Chicago, and then when he joined Boom Chicago and came to Amsterdam, that’s when our friendship really cemented.”

Joe Kelly is another of the show’s co-creators, and he’s also a Boom Chicago alum. There’s at least one joke in the new season that feels like a nod to their shared time in Amsterdam. Regarding a new teammate who is prone to blunt pronouncements, the players are told: “He’s not being rude, he’s just being Dutch.”

Was that inspired by the trio’s experiences in Amsterdam? “Yep, a 100%,” said Hunt. “Dutch people would come up to you and be like, ‘Hey, we’ve seen your show! We did not like it!’ One time a gal saw the show and told me I was sweating too much; a month later she came to see the show again and said, ‘Oh, it’s so good to see you, I love your show very much. I have something for you,’ and she gave me deodorant. She wasn’t being rude, she was just being Dutch.”

How did Hunt and his collaborators first conceive of Coach Beard and his place in Ted’s world? “The main thing — and Joe Kelly realized before we did — was that Ted was clearly going to wax poetical and be loquacious and monologize. Therefore, the strongest contrast would be someone who speaks as little as possible.” As for Beard’s name: “When Jason was on ‘Saturday Night Live,’ one of his favorite things was to give people a regular first name and then a noun for a last name, which is how Ted Lasso came to be. And just looking at my picture, well he’s Beard — first name unknown (laughs).”

Ted and Beard may be polar opposites in terms of manner and mood, but Hunt said he and Sudeikis are only now just finding out about similarities they share in real life.

“His uncle is George Wendt (of “Cheers” fame), so his mom’s side of the family are the Wendts, and they used to live in Beverly. My mom’s family lived in Beverly as well. Neither one of us is South Side Irish, but we’re both the offspring of South Side Irish.

“Also, neither one of us has brothers, we only have sisters. Which is also true of Joe Kelly. And the show’s other creator, Bill Lawrence, is an only child. So here we have this show that is supposedly the antidote to toxic masculinity, and maybe that’s because it’s written by guys who did not have to deal with whatever macho competition brothers do to each other growing up.” (According to Hunt, there are six men and five women writing for the show this season, including Ashley Nicole Black, a Second City alum who also stars on HBO’s “A Black Lady Sketch Show”).

Here’s another bit of trivia: A sketch from Hunt’s Boom Chicago days had him playing Roy Keane, the real-life footballer whose talent and prickly personality are legendary among those who follow the sport.

Is Roy Kent, the show’s consistently short-tempered player-turned-coach, a riff on Roy Keane?

“Pretty much. We were always fascinated by him,” said Hunt. “He was one of several in a tapestry of lunatics that make the sport so compelling. That period between 1999-2002 is when me, Jason and Joe — three guys who were big fans of American sports, but had basically no exposure to soccer — all discovered that soccer is awesome! And part of what’s great about it are these insane characters. And at that time especially, there was no one more insane than Roy Keane.

“As we were developing the role, it was like: OK, we’re not going to actually make the character Roy Keane. We decided to call him Roy Kent (as a placeholder) and change it later. And then as we got closer and closer to shooting. his name remained Roy Kent.”

“Ted Lasso” is a show so clearly informed by a romanticized notion of Midwestern humility, and I wondered if Hunt ever returns home to the place where it all started.

“I’ll be coming over Labor Day for a family wedding,” he said. His mom passed a few years ago. She was a triplet and one of 12 siblings. “So I still have tons of family in Chicago and tons of friends to see.”

Ted would no doubt be proud.