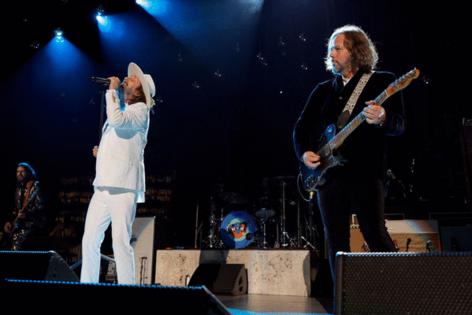 When it was announced The Black Crowes would reunite in 2020 for the 30th anniversary of “Shake Your Money Maker,” it was hard not to think about that 1990 show at The Pavilion at Star Lake in western Pennsylvania when the brash young Southern rock band gave old veterans Aerosmith a run for their money. That night, the 20-somethings from Georgia, on their maiden tour, seemed like the more dangerous band.

That album, loaded with such keepers as “Jealous Again,” “Twice As Hard,” “Hard to Handle” and “She Talks to Angels,” sold 5 million copies and established The Black Crowes as one of the premier bands harnessing the freewheeling energy of 1960s/’70s rock and soul.

That was a lot to live up to, especially with the wave of grunge that was about to hit us, and while The Black Crowes continued to feed its following with five more albums over the next decade, nothing quite matched that first spark.

Since the first hiatus in 2002, The Crowes have been off and on, depending on how brothers Chris and Rich Robinson are getting along and what side projects they have going. The latest split, in 2015, regarded ownership of the band.

With the 2019 announcement, the Robinson brothers had worked through those differences and were ready to go out and play “Shake Your Money Maker” in full, with longtime bassist Sven Pipien and three new touring members.

The pandemic had other plans.

A year and change later, The Black Crowes are one of the first major bands back on the road, now celebrating the 31st anniversary of that debut album. We checked in via Zoom with frontman Chris Robinson, who at 54 is looking every bit the rock star with long hair, beard and silky white clothes.

Q: What was it like getting back together, announcing this tour and then having to shelve it?