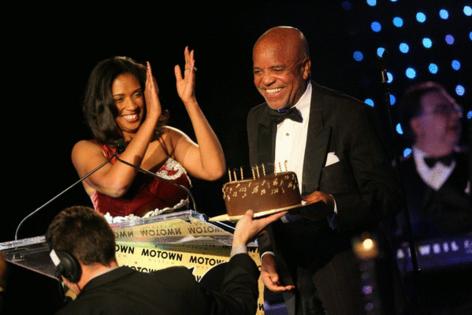 Motown founder Berry Gordy has been named a Kennedy Center honoree, one of five figures to be celebrated in December for exceptional achievement in arts and culture.

"My first reaction was joy, then disbelief and then: 'Did I hear that right?'" Gordy told the Detroit Free Press about receiving the news. "It was so exciting to me overall. I had all these emotions at one time, and I realized how much it meant to me."

Gordy, the Detroit native who built his homemade music operation into one of history's most successful and influential independent record companies, has been honored by the Grammys, inducted into the Rock and Roll Hall of Fame and received the National Medal of Arts.

But the Kennedy Center is a special distinction, Gordy said.

"President Kennedy was one of my favorite heroes, so to be honored in his name means the world to me," Gordy said. "I'm extremely happy to join the past and present honorees and become part of this American legacy."

In a prepared statement, Kennedy Center chairman David Rubenstein lauded Gordy as a visionary figure who "brought the quintessential soulfulness of Detroit into every home in America, elevating the Motown sound to become a national treasure."

Gordy will be in the famed Kennedy Center box seats Dec. 5 for the gala celebration, which traditionally has been attended by the sitting U.S. president. The event will be taped for a two-hour prime-time special to air on CBS and stream on Paramount+.

"After the challenges and heartbreak of the last many months, and as we celebrate 50 years of the Kennedy Center, I dare add that we are prepared to throw 'the party to end all parties' in D.C. on December 5th, feting these extraordinary people and welcoming audiences back to our campus," Kennedy Center president Deborah Rutter said in statement.

Walt Disney Co.’s “Jungle Cruise,” based on a theme-park ride, opened as the top film in North American theaters, collecting a higher-than-expected $34 million sales in a still-tough climate for the nation’s movie ...Read More