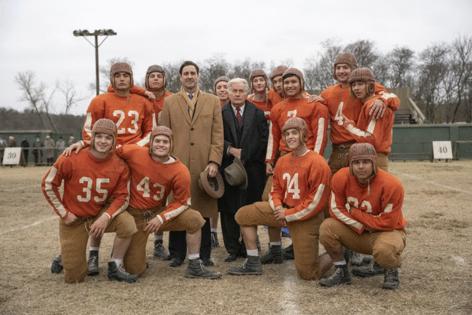 There’s no “I” in team, but there is in mighty.

Set against the backdrop of the Great Depression, “12 Mighty Orphans” — based on a true story and screening at the Tribeca Film Festival — features Martin Sheen in the role of Doc Hall, a jovial man devoted to his work at the Fort Worth Masonic Home and the orphans who live there. Under the tutelage of Rusty Russell (Luke Wilson), the orphaned boys go from underdogs to formidable football players, making their home state proud.

“These kids had very little going for them except each other. And I grew up believing that when we serve others first, we serve ourselves best. And so that’s the beginning of community and that just had such a deeply personal appeal to me,” the “West Wing” star, 80, told the Daily News. “And I could not not do it.”

The boys are shocked to learn that Russell, a World War I vet and high school coach who left his post to teach at the Texas orphanage, is actually one of them. The real-life Russell was abandoned by his mother at an orphanage when he was young.

“He came to this place by choice and wanted to be of service to kids that he knew were dealing with what he’d dealt with as a child,” explained the “Apocalypse Now” star.

Pointing to the man’s traumatic experience during the war, Sheen noted the character of Rusty “carried that with him.

“And so he could not have had a better background to understand what these children were going through, these boys. But the experience that he had in the Army, which was, in a sense, a community, he tried to create with them in their barracks, if you will.”

The beloved coach, he said, “enlarged their imaginations” and “encouraged them not to worry about themselves, but to think about each other.”

“And they were able to rely on each other and they became a team, which is really what community is about,” continued Sheen. “When we rely on one another, we create community. And, you know, we serve ourselves best when we serve others first is always the first step of community ... is a realization that you’re not in this alone. You don’t have to change the world, you just have to be willing to change yourself for the greater good.”

That mindset motivated Doc Hall as well when recovering from alcoholism, added the “Grace and Frankie,” “Departed” and “Judas and the Black Messiah” actor, who loved Doc Hall’s sense of humor.

“He thought of these children that he was responsible for as his own children,” Sheen said. “He was eventually able to overcome his alcoholism, again, through community. He was made to realize that he was damaging the whole by damaging himself, which is what we do.”

With so many young actors playing the underdogs-turned-athletes central to the story, Sheen recalled telling someone that, when working with teenagers, “You really have to have a sense of humor.”

Sheen feels “the timing couldn’t have been better” as far as when the film — which wrapped around the start of the coronavirus pandemic — releases, given its uplifting message.

“The time since [early 2020] reflects a lot of the ambience of the film itself. We were filming a story that took place during the Depression, you know, and in one of the most hard-hit communities in the country,” said the star of “The Way.”

That the film will open in theaters and “people can gather and experience something together in one place, is very gratifying,” said Sheen. “It’s blossoming at a time that we are beginning to reemerge.”