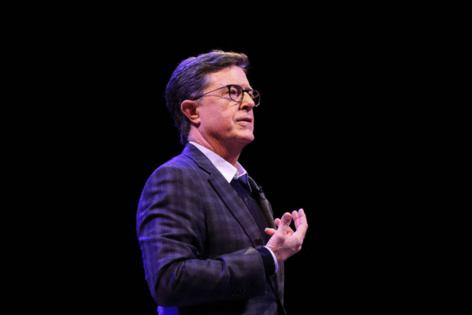 Stephen Colbert hosted the CBS late-night program in front of a full, live crowd at the New York City venue for the first time since March 2020, when the COVID-19 pandemic caused the broadcast to transition to a remote format.

Chants of “Stephen! Stephen!” filled the theater as excited audience members stood shoulder-to-shoulder in both the lower and upper decks.

The cheers grew even louder once Colbert welcomed the audience members back.

“So how ya been?” Colbert quipped to laughter at the start of his opening monologue.

“The Late Show” had operated remotely for 460 days between episodes with packed crowds.

“I don’t know if I even remember how to pander to the most beautiful crowd in the world,” Colbert, 57, joked to uproarious applause. “It feels a little bit like the first day back at school.”

Audience members were required to show proof of a COVID vaccination in order to attend.

Many in the crowd did not wear masks Monday, as the face coverings were optional.

Jon Stewart, whom Colbert worked with on “The Daily Show,” was in studio as a guest on Monday’s episode of “The Late Show,” while Jon Batiste performed as the musical guest.

During his appearance, Stewart got animated as he laid out a theory that COVID-19 began in a lab.

Earlier this month, Jimmy Fallon’s “The Tonight Show” brought back a full audience for the first time in more than a year. The NBC program had brought back a reduced crowd in March.