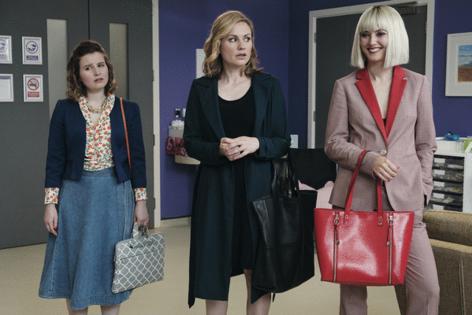 Forget lifestyles of the rich and famous. “Flack” cares about people behind the celebrities.

Part workplace comedy, part cautionary tale, the Amazon Prime series returned last week for its second season after nearly two years off the air — and continues to focus on a group of fixers in London as they get their headline-grabbing clients out of the stickiest and most tabloid-worthy jams. The leading ladies, meanwhile, played by Anna Paquin, Lydia Wilson and Rebecca Benson, are falling victim to the glamour and disgrace around them.

The second season opens with Paquin’s Robyn trying to pick up the pieces of a series of personal and professional explosions. She slept with the boyfriend of her best friend Eve (Wilson), and is feuding with her sister (Genevieve Angelson). Her romantic life is in shambles.

“We pick up with her genuinely trying to stay clean and sober, genuinely trying to repair harm with the people in her life she has caused harm to. But she’s white-knuckling it. She’s hanging on for dear life but she’s not really actually doing any deeper work on herself,” Paquin, 38, told the Daily News.

“She’s walking the straight and narrow but with nothing to support it and nothing to back it up. You can’t really just run away from your problems and Band-Aid them like that. The things that go into her being this dysfunctional, chaotic human that she is are still completely undealt with.”

“Flack” never attempts to hide Robyn’s flaws, or give her the benefit of the doubt. She lives with her mistakes and betrayals. In the cases of Eve and Melody (Benson), the intern fired at the end of the first season, Robyn stares down her shortcomings.

Hidden in the chaos of celebrity publicity — clients this season include Daniel Dae Kim — is a story of how these women became who they are.

“I think that she’s trying to be the person that she needs to be for people, which hasn’t always been the best person to be in general, or the healthiest person for her to be,” Paquin told The News.

“She tries to be the specific thing that every individual in her life needs, and when you try to be everything for everyone, it doesn’t leave a whole lot of room to really be yourself or know who you are without all the distraction.”

That idea, of being someone else’s possessive, is common: wife, mother, best friend, secretary. The women of “Flack” stretch beyond those definitions, but to varying degrees. Melody feels more responsibility than Robyn, who in turn feels more responsibility than Eve, who feels almost none at all. Somewhere in the middle is boss Caroline (Sophie Okonedo), a crueler, harsher Miranda Priestly with a quicker tongue. To the left of Melody is Robyn’s sister, Ruth, whose entire adult life has been about her husband and children and who is now figuring out how to expand her world beyond that.

There’s a sharpness to these women that makes them less relatable, beyond the wild parties and famous clients. Whether they succeed or fail, they do it big. Yet it’s a house of cards: Every apology works only 90% as well as the one before it. But Robyn keeps apologizing because it’s all she knows how to do.

Where a fairy tale would let Robyn get her life together, make amends and find some peace, “Flack” doesn’t flirt with a happy ending. The season ends on a cliffhanger, and officially the show has been canceled, though Paquin teased the possibility of more “if the fans want it.”

In a world post-”Mad Men” and “Breaking Bad,” some shows get credit simply for allowing their messy, broken characters to be women. Paquin wants more than that.

“I don’t think feminism is a concrete and exclusive club or concept. It means different things to different people,” she told The News.

“For me, at least part of it is actually being treated like equals, where we actually get to have characters who are competent, highly skilled, top-of-their-field people, but don’t have to be perfect all the time and can actually just be complicated, badass women.”