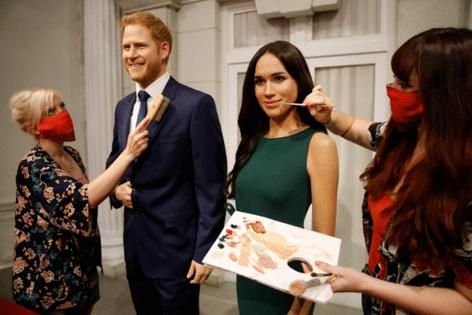 The legendary wax museum has revealed that figures of the runways royals has been officially been moved away from Queen Elizabeth and the rest of Britain’s royal family following their decision to step down from official duties.

Like their real-life counterparts, the waxworks are beginning a new chapter among the Hollywood elite.

When the museum reopens Monday, following a lengthy pandemic shutdown, visitors will find the Duke and Duchess of Sussex in the “Awards Party” zone.

It may be a better fit for the long run considering the row the couple has caused with bombshell revelations about their experiences within the royal dynasty.

With a refreshed look, the pair’s waxworks have updated outfits — a blue form-fitting dress and a navy suit — based on a viral photo captured shortly before they announced their decision to step down as senior royals March 2020.

The Baker Street attraction said the big move is in celebration of Harry and Meghan’s new roles as Netflix and Spotify producers, and reflecting their decision to swap Frogmore for Hollywood.

The new permanent home has the couple in the same company as their real-life celebrity friends Priyanka Chopra Jonas, Victoria and David Beckham and George Clooney, as well as A-listers like Brad Pitt, Dwayne Johnson and Nicole Kidman.

Madame Tussauds London general manager Tim Waters, General Manager commented: “Glitz and glamour are making a welcome return and Madame Tussauds London just became the hottest spot in the city! The launch of Awards Party brings back the fun and excitement of a stylish night out that London has been craving since the start of lockdown. Ever watchful of the celebrity landscape we’ve also moved Prince Harry and Meghan Markle’s figures to join their Hollywood friends, reflecting their new status on the world stage as A-list favorites.”

“We’ve put a lot of thought in to the design of Awards Party to really make guests feel like a VIP, experiencing a star-studded evening where they are the night’s big winner,” he added. “The unveiling of our new Awards Party zone is just the first in an exciting line-up of launches that will set us up for an unmissable summer.”