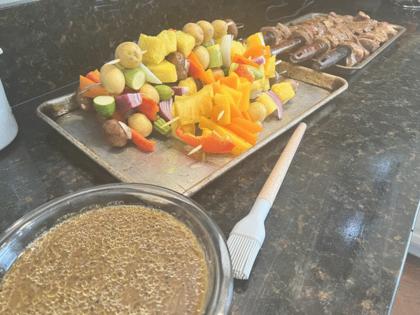 Certain meals are simply fun to prepare and fun to eat. In my opinion, grilled shish kebabs definitely fall into that category. Not only are they perfect for grilling, the end result Is a meal that covers everything: meat, vegetables and starch.

The history of shish kebabs can be traced back to the soldiers of Turkey. During wartime they would fill their swords with game of the region and cook it over an open flame. The Greeks may have been in the shish kebab game early on as well. In my opinion, we have to give the nod to Turkey, as the term “shish kebab” comes from the Turkish words “sis kebab,” meaning “skewer” and “roast meat.” The marinade recipe we use comes from my in-laws. We have used this specific recipe for decades. It’s rich, bright and delicious.

Before getting into the grilling, let me share a pet peeve of mine. When you walk past your favorite meat counter, if there are skewers of shish kebabs, you will probably notice each skewer has meat and vegetables on the same skewer. Why? It looks better. But, does a bell pepper cook in the same amount of time as a chunk of beef? Nope. So, if you want to take your shish kebab game to the next level, separate the meat from the veggies. We used roughly six pounds of chuck roast from the shoulder for this recipe. We fed nine people. So, the recipe below has been cut in half. Let’s get started.

We cut the beef into fairly large pieces, pieces that you have to cut in half when eating. We mixed the marinade, placed the cubed chuck in a large ziplock bag and poured the marinade in the bag. The air was pushed out, the bag was sealed and then placed in the fridge for 24 hours.

For the vegetables we used red, yellow and orange peppers, red and yellow onion, small yellow potatoes (boiled until they were roughly 50% cooked) chunks of pineapple, mushrooms and fingerling zucchini. The meat was placed on the skewers so the pieces touched, but were not squished onto each other. The pellet smoker was set at 250 degrees and the meat and veggies were “smoked” at that temperature for 45 minutes or so. The veggies and the meat were brushed with the marinade 4 or 5 times. The smoker was turned up to 350 degrees for another 30 minutes. The veggies and meat were pulled when the meat hit 135 degrees internal temperature. We stopped brushing the meat and veggies for the last 15 minutes or so.

The meat was put in one large bowl and the veggies were put in another large bowl. We also had some saffron rice. Perfect meal for people to simply load up their plate and get at it. Give this a try!

Last night I smoked some spare ribs. I’m always curious to know the true opinion of those who eat the food I prepare. I mean, I REALLY want to know their TRUE opinion. So, this morning, I asked Liz what she truly thought...Read More

July 4 is the No. 1 day for cooking out in the United States, according to the Hearth, Patio and Barbecue Association. So someone near and dear has probably already been tasked with buying charcoal or making sure the ...Read More

Everyone expects to see red, white and blue at a Fourth of July celebration. This creamy dessert takes that patriotic color scheme to heart by combining a no-fuss cheesecake with the fruits of the season — strawberries ...Read More