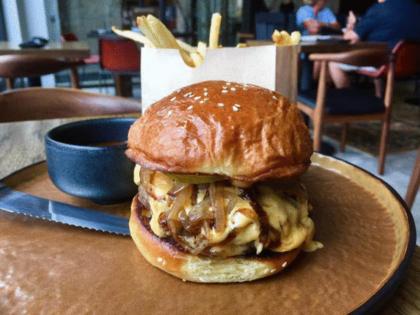 MINNEAPOLIS — It sounds heretical, particularly since the outdoor cooking season is getting started, but here goes: For a truly delicious burger, skip the grill, stay indoors and reach for a cast-iron skillet.

This advice is gleaned from interviews that I conducted with more than 100 Twin Cities chefs between 2013 and 2019 for an online column called Burger Friday, where I dissected the secrets behind burgers encountered in venues that ranged from drive-ins to food trucks to four-star kitchens.

A skillet allows the patties to baste in their own juices as they cook. That’s a huge improvement over losing all-important moisture to the spatters that cause annoying grilling flare-ups.

Using the right beef is also key. Begin by selecting the lowest percentage of lean ground beef that’s available, remembering that the lower the number, the higher the fat content and the juicier the burger. Stick with 85% or lower. If you have access to a butcher, ask for freshly ground chuck. It’s even better if the beef can be fortified with bits of richer cuts, such as brisket or sirloin.

With as little handling as possible, form the ground beef into 3- to 4-ounce meatballs. Place the meatball into a hot cast iron pan over medium heat. Using a wide, thin spatula, smash the meatball into the pan until a thin (about ⅓ inch) patty forms. Cook, undisturbed, until the edges are crisped and browned, about 2 to 2 ½ minutes. Carefully extricate the patty from the pan, flip it and then cook for an additional minute.

OK, there’s a little bit more to it than that, but not much.

When selecting a bun, consider the bread-to-beef ratio. Don’t allow one component to overpower the other. Toasting the bun instantly elevates the burger’s appeal. Even the most generic, plastic-wrapped, eight-pack supermarket bun will blossom under the toasted treatment. Just after removing the patties from the skillet, spread room-temperature butter across the flat inside surfaces of the bun and let the skillet’s heat work its magic, until the bread is lightly browned and slightly crisped.

Summer marks a time for many high school graduation parties. But there’s nothing that says freshman, sophomores and juniors can’t have their own slice of celebration, too. After all, don’t some of our cinematic and ...Read More