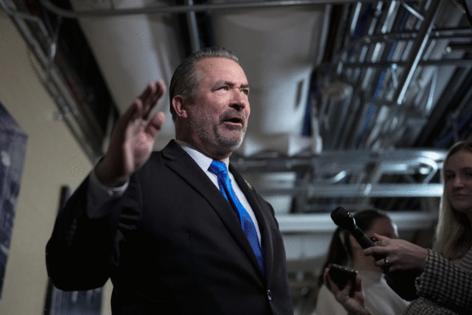 Ultraconservatives in the House have dominated the public discussion on the US debt ceiling, but Speaker Kevin McCarthy can’t afford to ignore GOP centrists if the country is to avoid a catastrophic payments default later this year.

Republican moderates are looking for bipartisan solutions to the debt-ceiling dilemma that would avoid the massive cuts to federal spending — including popular Social Security and Medicare programs — that some GOP members have demanded.

Their ideas, which are more likely to gain traction with Senate Democrats and the White House than with conservatives, include indexing discretionary spending to inflation; tying the debt ceiling to the country’s GDP; and small, across-the-board cuts to outlays. Discretionary spending excludes entitlement programs.

Both parties are also working on long-term fixes to Social Security that could have significant implications in the debt-limit fight — if they can come to a resolution that can pass both chambers.

Senate Republican Leader Mitch McConnell has said it’s up to President Joe Biden and McCarthy to avert a debt default. Any Senate bill addressing the debt ceiling that could get the requisite 60 votes in that Democratic-led chamber would almost certainly not win passage in the House, where Republicans hold a slim majority.

That leaves the House speaker, who made concessions to conservatives to be elected to the post, facing the challenge of corralling his factious party.

“It’s been made clear over the past week that House Republicans are going to have to be proactive and take the lead on debt-ceiling negotiations,” Majority Whip Tom Emmer of Minnesota said at a press conference Wednesday.

Representative Don Bacon, a moderate Republican from Nebraska, wants to tie increases in discretionary spending to inflation. Defense spending, in particular, typically climbs much faster than consumer prices — to the consternation of liberal Democrats and fiscal conservatives.

“It would be a compromise, I believe, that you can get many people on board,” Bacon told Bloomberg News in an interview. “Democrats and Republicans. Because you’re not making draconian cuts, but you’re reducing spending. It’s under inflation, so in the long run, you’re pointing the ship in the right direction.”

As for mandatory spending, Bacon wants both parties to address Social Security and Medicare via a joint committee, emphasizing that one party cannot solve the issue alone.