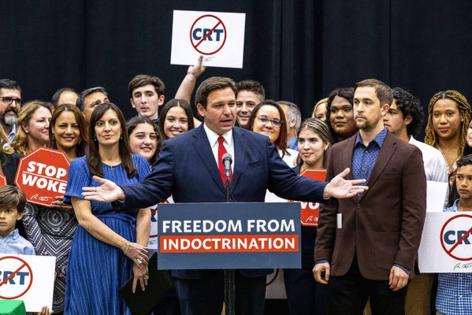 Crump, best known as the lawyer for Black victims of police violence including the family of George Floyd, said he would take legal action if DeSantis and the Florida Department of Education don’t reach an agreement with the College Board to offer the Advanced Placement course.

“Gov. DeSantis is going to get a lesson of his own today,” Crump warned.

Black legislative leaders, activists and Crump gathered in the Capitol rotunda to condemn the DeSantis administration’s decision, joining a growing chorus of critics that includes Vice President Kamala Harris and others.

The DOE has said the course runs contrary to a state law banning critical race theory and included lessons on “Black queer studies,” “Black feminist thoughts” and “the Black struggle in the 21st Century.” The department also criticized some of the authors whose works were included, saying they were communists or wrote about communism in America.

“When you try to use Black history to shoehorn in Queer Theory, you are clearly trying to use that for political purposes,” DeSantis said Monday.

The course is being offered as a pilot in 60 high schools nationwide — a number that initially included the Florida State University Schools’ high school — with the College Board planning to offer it at all interested schools in the 2024-25 school year.

As in all AP courses, “students will encounter evidence, weigh competing viewpoints, and come to their own conclusions” about topics introduced, the College Board said in a statement. “AP students are never required to agree with a particular opinion or adopt a particular ideology, but they are expected to analyze different perspectives,” it said.

The College Board plans to release a “course framework” for the course on Feb. 1.

“If the course comes into compliance and incorporates historically accurate content, the Department will reopen the discussion,” Cassie Palelis, a Department of Education spokesperson, said in an email.

But Sen. Geraldine Thompson, D-Orlando, a retired teacher and college administrator, said she and others doubt the subject is covered in most schools because there is no enforcement nor consequences if it is not.

“Florida, even though it has a law on its books, it has not enforced that policy, that law,” said Thompson, who is Black and taught in Orange County Public Schools before joining the administration at Valencia College.

That makes the requirement akin to a speed limit without police enforcement or fines, she added. “Nothing has happened when people have not provided this instruction.”

Florida offers African American history courses that high school students can take as electives, but enrollment is limited, with about 9,450 teenagers enrolled last year, according to data from the education department. That’s a little more than 1% of the students in grades 9 to 12.

In Central Florida, neither the Osceola nor Seminole county school districts offer the courses. Orange County Public Schools does but at only three of its 22 traditional high schools.