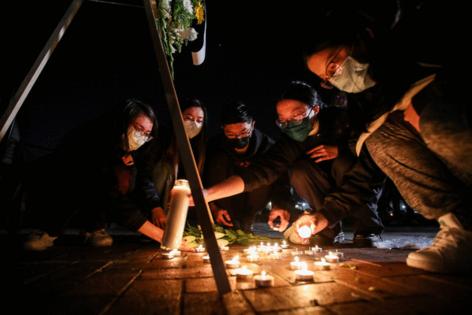 LOS ANGELES — Their motives for mass murder appeared to be different — workplace enmity, law enforcement officials said, or personal resentment, or a political conflict in a homeland across the ocean.

But they were all Asian men of retirement age, who within the past year have been accused of expressing their bitterness by spraying fellow Asians with bullets, in the very places where Asian immigrants go to escape isolation.

Even as they grieve the victims, Asian Americans across the country are grappling with a new reality. Someone who looks like their grandfather, who traveled a similar immigrant path, is suspected of committing a singularly American act — opening fire on a group of innocent people, at a Taiwanese church last May, at a ballroom dance studio in Monterey Park on Saturday and in the coastal agricultural community of Half Moon Bay on Monday.

For a community already reeling from a rise in anti-Asian hate crimes during the pandemic — sometimes with senior citizens as victims — the Asian-on-Asian violence feels like too much to bear, especially with the two most recent shootings occurring around the Lunar New Year holiday.

Only three men are accused of committing these horrific acts, but the isolation and mental health struggles that may have sent them spiraling are common threads for some older Asian immigrants, who may have experienced war back home and who have experienced the dislocation of settling in a foreign country.

Among friends and family on social media, sons and daughters are anguishing over whether they were doing enough for elders who have been through so much but often do not have the vocabulary to open up about problems — even in their native language.

“They don’t speak English. Their kids don’t speak their mother tongue. Older generation cannot connect to younger generation. That is a picture of the typical Asian American working class family, especially East Asian,” said Sonny Le of Oakland, who has worked as a medical interpreter for Vietnamese and Chinese Vietnamese senior citizens for more than 20 years. “Stoic. Bottling it up. It’s a way to cover for our shortcomings, our inability to articulate what we are thinking or feeling.”

Some groups have organized virtual grief circles because of the recent massacres for people to be together, if only online.

“Know that you are not alone in your pain, your fears, your anger, your urge to disconnect, your need to be with your people,” said an online message Tuesday from 18 Million Rising, an Asian American advocacy group.

Peggy Huang’s parents attend the Taiwanese Presbyterian church in Laguna Woods where a gunman fired into a lunchtime banquet in May, injuring five elderly parishioners and killing a 52-year-old doctor.