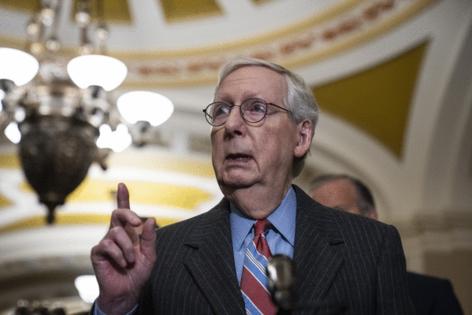 A compromise to raise debt ceiling and put in place spending cuts will “have to come out of the House,” said McConnell, who in 2011 helped reach an accord with then Vice President Joe Biden that averted a default. “That is where the solution lies.”

Any bill addressing the debt ceiling that can get the requisite 60 votes in the Democratic-led Senate won’t pass the House, where Republicans hold a slim majority, McConnell said.

The comments make it less likely for now that the Senate will try to initiate a compromise solution to the impasse which risks a market-rattling showdown closer to June when Treasury’s extraordinary measures run out.

Conservatives want to extract federal spending cuts in exchange for lifting the debt ceiling. Biden, however, has said he won’t negotiate on the debt.

Biden and McCarthy are expected to meet soon to discuss the debt ceiling. Biden has said it would be a financial “calamity” if the U.S. defaults on its obligations.

“I accept your invitation to sit down and discuss a responsible debt ceiling increase to address irresponsible government spending. I look forward to our meeting,” McCarthy tweeted on Friday.

McConnell, who last week was optimistic about avoiding a payments default, said Tuesday that the debt ceiling provides “an opportunity” for a discussion on spending-cut concessions.

“This is a good time to talk about it to try to get an outcome,” he told reporters.