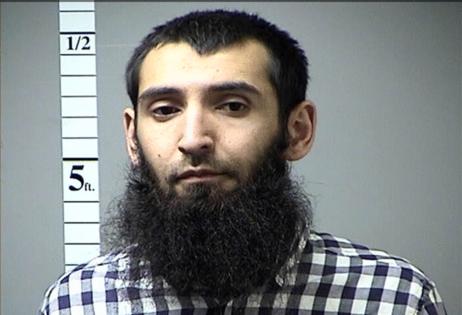 NEW YORK — An accused terrorist chose Halloween to “mow over people” on crowded city streets “like crops” in a 6,000-pound truck as part of his deluded quest to join ISIS, prosecutors told a Manhattan jury Tuesday.

In his closing argument at Sayfullo Saipov’s death penalty trial in Manhattan Federal Court, Assistant U.S. Attorney Jason Richman said the native of Uzbekistan wanted to become a member of the Islamic State terror group by attacking Americans on their home soil.

The sick goal was all that was on Saipov’s mind when he barreled down the busy bike path parallel to Hudson River Park, killing eight people and wounding 11 others on Oct. 31, 2017, the prosecutor alleged.

Richman said before the attack, Saipov’s motives were clear, based on his online search history. During the bloodshed, he carried hand-drawn ISIS slogans.

“After his attack was completed, after he turned that bike path into a scene of bleeding and horror, after he smashed into a school bus with such force it had to be sawed open — after he received hours of medical care at the same hospital where some of his victims were treated — he asked to hang the ISIS flag and he smiled,” Richman said.

Saipov, 34, had written, “The Islamic State shall endure” in a notebook, according to the prosecutor.

“These were his words to tell the world why — why he attacked this city,” Richman said. “Why he targeted innocent civilians. Why he turned a bike path into his battle field, why he ran them over without mercy.”

The prosecutor said Saipov methodically researched how to execute the attack for months and chose a truck as his weapon of choice to inflict the most harm. He pointed to Saipov’s phone records, showing how he took inspiration from the 2016 terror attack in the French Riviera city of Nice, when Mohamed Lahouaiej-Bouhlel, a French-Tunisian man, killed 84 people by plowing into crowds of Bastille Day revelers in a truck and then opening fire.

Richman said Saipov planned to maximize the number of people he killed by researching busy areas that attracted large crowds and told the FBI he specifically chose Halloween because he knew there would be more people on the street.