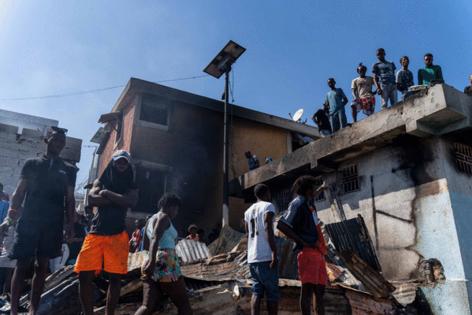 The United States is providing Haiti with an additional $56.5 million in urgent assistance to help with its deteriorating humanitarian crisis and ongoing cholera epidemic.

The additional assistance was announced shortly after the arrival in Haiti of Isobel Coleman, deputy administrator for the U.S. Agency for International Development. She arrived on Tuesday, the same day that the United Nations Security Council met to discuss the situation in the Caribbean nation.

At least one country, Switzerland, announced during the session that it plans to bolster its assistance while the U.N. continued to urge the international community to fund its humanitarian requests on behalf of Haiti.

A report by U.N. Secretary-General Antonio Guterres painted a dire situation, in which alarming levels of gang violence are preventing people from getting basic services as well as food, fuel, safe drinking water and other supplies.

“Gang-related violence has reached unprecedented levels, which has only exacerbated the ongoing humanitarian crisis and hampered the ability to address the cholera outbreak, which has disproportionately impacted children and youth,” U.S. Ambassador Robert Wood, who serves as alternate representative for Special Political Affairs at the U.N., said in New York during the public hearing, which was followed by closed-door consultations.

In a statement, USAID said the additional funding — which will not go to the government but to organizations — will help partners meet urgent humanitarian needs of more than 868,800 people across Haiti by distributing medical supplies and medicines, improving access to safe water and bolstering health facility operations, including cholera treatment centers.

Haiti has been seeing a rapid increase in cholera, with the country reporting 25,275 suspected cases as of Friday. It has confirmed 1,938 cases and at least 496 deaths, according to the latest figures from the Ministry of Health. The disease has now spread throughout the country, with 40% of suspected cases among children under age of 15.

In a separate announcement, American Airlines, which operates daily international flights to Port-au-Prince, said American Airlines Cargo, in partnership with the nonprofit humanitarian organization Airlink, will be carrying more than 55 tons of medical supplies from Europe to Miami, where the supplies will then be sent to Haiti. Among what American will be moving: personal protective equipment, clean water filters, equipment for inhalation therapy, blood tubes and other sterile items to help fight the disease.

In addition to the cholera crisis and the unprecedented levels of violence, Haiti is also dealing with the fallout of a disastrous economy. Inflation is currently at 47% and 58 percent of the people now live under the poverty line, the U.N. said. Meanwhile, tens of thousands of Haitians have been displaced by gangs, forced to live in spontaneous settlements, while close to 5 million are facing conditions of acute hunger across the country.

“The new assistance will also provide urgent food assistance, as 4.7 million people face a severe food crisis, and will support gender-based violence prevention and response services for the most vulnerable,” USAID said.

Coleman’s visit is expected to last two days, during which she will meet with key officials from the Haitian government and the U.N. as well as local staff and partners.

Conversations will also include exploring how the United States can work with local partners in Haiti to promote responsive and accountable governance, as envisioned under the Global Fragility Act, a 10-year U.S. Strategy to Prevent Conflict and Promote Stability.