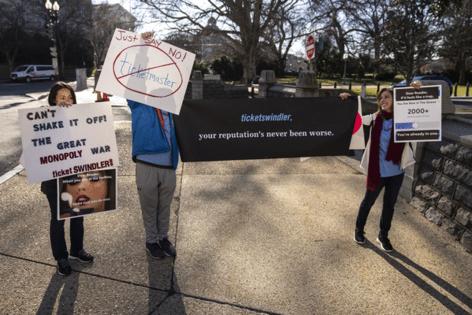 It was only a matter of time before a politician awkwardly quoted Taylor Swift at Tuesday morning’s Senate Judiciary Committee hearing on Ticketmaster, Live Nation and the U.S. ticketing market.

“May I suggest respectfully that Ticketmaster ought to look in the mirror and say, ‘I’m the problem. It’s me,’” Sen. Richard Blumenthal, D-Conn., told Live Nation Entertainment’s President and Chief Financial Officer Joe Berchtold, referencing the chorus to Swift’s No. 1 song, “Anti-Hero.” “The reason is, quite simply, that you are the ones ultimately responsible for the astronomically rising prices, the exorbitant hidden fees, the sold-out shows and the bots and scalpers.”

In November, Ticketmaster bungled the on-sale for Swift’s upcoming stadium tour, prompting outcry from demoralized fans who were left ticket-less and, soon thereafter, criticism from a range of politicians and a class-action lawsuit from disgruntled Swifties. Tuesday’s hearing, led by Senators Amy Klobuchar, D-Minn., and Mike Lee, R-Utah, showed bipartisan skepticism towards the Live Nation/Ticketmaster conglomerate, which dominates the live music market.

Critics contend that Live Nation, which merged with Ticketmaster in 2010, exerts undue power over the concert industry. Live Nation is the country’s largest concert promoter, while Ticketmaster controls an estimated 80% of the ticketing market. The companies were allowed to merge under a Department of Justice consent decree that forced Ticketmaster to license its software and prohibited retaliatory behavior against competitors.

Tuesday’s hearing, which featured testimony from ticketing executives, independent promoters, antitrust experts and artists, scrutinized the company’s alleged anticompetitive practices, high service fees and inability to weed out automated scalpers from the ticket-buying process. The aggressive line of questioning from both Democratic and Republican senators made clear that there is a real regulatory and legislative threat to Live Nation and Ticketmaster’s business model — and perhaps its future as a single company.

“Innovation in live event ticketing has been stunted because Live Nation Entertainment Inc. controls the most popular entertainers in the world, the ticketing systems, and even many of the venues,” said Jack Groetzinger, co-founder and chief executive officer of SeatGeek, a direct competitor to Ticketmaster. “This power over the entire live entertainment industry allows Live Nation to maintain its monopolistic influence over the primary ticketing market. As long as Live Nation remains both the dominant concert promoter and ticketer of major venues in the United States, our industry will continue to struggle with the challenges that face it today.”

Clyde Lawrence, singer for the New York soul-pop band Lawrence, said that “ever since we started touring, we noticed what felt like lopsided deal mechanics in certain aspects of the live music industry.”

Live Nation’s “horizontal and vertical reach makes it hard to create competition,” he continued. “Companies in the ticketing space might bring major innovations that allow for lower fees, greater transparency ... and advancements in handling the problematic secondary ticketing market … But it doesn’t matter how innovative these other ticketing companies are; if every Live Nation show needs to be ticketed exclusively through Ticketmaster, there’s no chance for them to break through.”

Kathleen Bradish, of the American Antitrust Institute, went even further.

“Live Nation/Ticketmaster is a monopoly,” she said, “and will act because it has a vast incentive to exclude competition.”