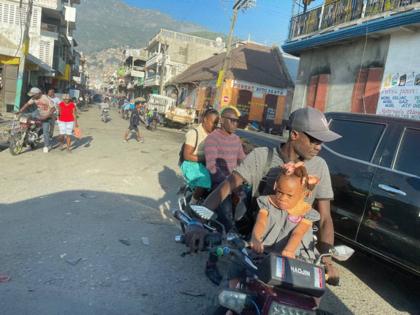 Over the past three months Haiti has seen some of its worst gang-related violence in decades, affecting the functioning of the judiciary, impeding the government, challenging the United Nations efforts to fight illicit trafficking and keeping children from going to school, U.N. Secretary-General António Guterres said in his latest report on the deteriorating situation.

Even neighborhoods of the capital that were once considered to be relatively safe have now fallen victim to the tightening grip of warring gangs. Just last week, residents of Petionville found themselves trapped in their homes as a gang ambush to the east left three police officers dead, another missing and a fourth injured, as a rise in kidnappings at the southern edge left people scared to go out.

Guterres’ three-month update of the situation in Haiti paints a deteriorating situation. The U.N. Security Council will take up the report Tuesday morning. Diplomats are looking for not just an update on the security situation, but Haiti’s progress toward staging elections to replace its president as well as both chambers of Parliament following the end of the terms of the country’s last 10 elected officials earlier this month.

In the report, the secretary-general acknowledges that the elections calendar remains uncertain, despite a promise by interim Prime Minister Ariel Henry that 2023 will be an electoral year. Guterres noted that despite efforts by the interim government and the U.N. to stave off a worsening crisis and tackle many of the issues, including an ongoing cholera outbreak, their work has been impeded by the worsening gang violence and kidnappings.

He noted that over the last three months the political landscape in Haiti was shaped by three events: the establishment of a U.N. sanctions regime to implement travel bans, asset freezes and a targeted arms embargo against individuals engaging, directly or indirectly, with armed groups and criminal networks; the imposition of bilateral sanctions by the U.S. and Canada against several high-profile Haitian individuals, including a former president, two former prime ministers and two members of the current government; and the request by the Haitian government and the secretary-general for the deployment of an international specialized armed force to assist the Haiti National Police.

Direct talks held in early October between Henry and a prominent member of the Commission for a Haitian Solution to the Crisis, otherwise known as the Montana Accord, “ultimately did not make tangible headway.” However, new consultations between the government and others members of civil society group and the business community yielded a document, the National Consensus for an Inclusive Transition and Transparent Elections.

Though signed by some groups, the document remains the target of criticism, with some political groups saying it has no validity and is there to shore up the little power Henry has.

The reporting period was also marked by a siege of the country’s main fuel terminal, Varreux, which exacerbated the humanitarian crisis in the country and led to the call for a specialized international force to assist the Haitian police. Such a force is still needed, Guterres said, despite the end of a two-month gang siege.

The National Port Authority and other commercial ports, for example, “remain under constant gang attacks.”

“Road transportation remains at risk, with cargo shipping containers and goods being regularly hijacked and stolen,” the report said. “Police continued to struggle to maintain patrols around the ports, while gangs retained control of most of the main transport thoroughfares linking Port-au-Prince with the northern and southern departments.”