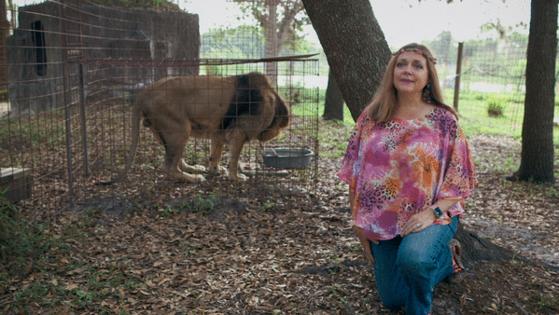 Owners of pay-to-play businesses pulled cubs from their mothers after birth, forced them to interact with the public and often confined them to tiny concrete cages when they got too large to handle.

The breeding has been a leading driver of the overpopulation of captive big cats in the U.S. as animals who outgrew the photo stage were passed to roadside zoos, private homes and other hellish places.

A decade after it was first introduced, the U.S. Senate on Tuesday passed a bill with unanimous consent to outlaw cub petting and the private ownership of big cats. The Big Cat Public Safety Act now goes to President Joe Biden for a signature. He has already voiced support for the measure.

“I’d tell someone there are thousands of tigers in backyards all over the country and the phrase we’d hear the most on our tours is ‘I had no idea,’” Howard Baskin said.

Sanctuaries, zoos and universities would still be able to own big cats under the law.

Individuals who currently own big cats would be grandfathered in but required to register their pets so local authorities are aware that exotic animals live in their communities.

Carole Baskin has been pushing to end cub petting and private ownership for 30 years, but she and her husband mobilized with national animal welfare organizations in 2011 to help craft the legislation.

It was introduced every year since 2012 but didn’t pass the House until 2020 after the release of Netflix’s “Tiger King” series, which focused unprecedented attention on the exploitation of big cats in America.

“Tiger King” followed the antics of Joseph Maldonado-Passage, an Oklahoma zookeeper who was one of the most egregious actors in the pay-to-play industry. The show featured Maldonado-Passage’s disdain for Baskin as she raised the alarm on his abuse.

Maldonado-Passage was sentenced in 2020 to 22 years in prison for wildlife crimes that included killing five tigers to make room for new animals at his zoo, as well as plotting to have Baskin murdered.

One of the most notorious businesses, Dade City’s Wild Things, shut down in 2020 after People for the Ethical Treatment of Animals won a lawsuit against the zoo over its cub petting business.

It’s impossible to know exactly how many big cats live in captivity in the United States because several states have no laws on keeping exotic cats as pets. There is also no reliable reporting system for those who breed and ship cubs over state lines, blurring inventory counts the federal government is supposed to take each year on licensed exhibitors.

But estimates have put the number at nearly 10,000 in captivity in the U.S. In the wild across the world, fewer than 4,000 tigers remain.

Carole Baskin said the legislation will give the United States the credibility it has long lacked to prevent extinction of the tiger in the wild.

“It’s finally evidence that the U.S. is cleaning up its own mess,” she said. “We’re going to lose the tiger in the wild if we don’t save it from habitat loss and poaching. When we’ve tried to do it in the past, Asian countries look at us and say ‘you don’t even know where your own tigers are.”

Howard Baskin said bipartisan support from legislators and backing from public safety organizations helped the bill pass the Senate this year. First responders and law enforcement across the country previously had no way to know when dangerous animals live in their communities.