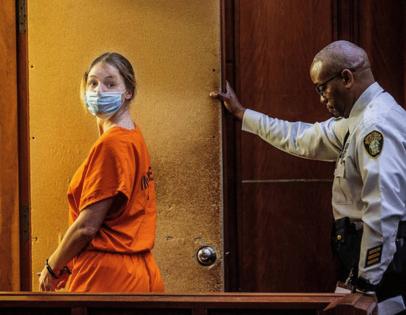 A Miami-Dade judge on Thursday informed attorneys that Courtney Clenney must remain behind bars as she awaits trial for the killing of Christian Obumseli on April 3 inside their luxury Edgewater apartment. Clenney, 27, is charged with second-degree murder with a deadly weapon in a case that has attracted worldwide media attention.

Circuit Judge Laura Cruz Shearon will publish the ruling at a hearing later on Thursday morning. The decision was confirmed by Miami attorney Larry Handfield, who represents Obumseli’s family.

“They were very happy, crying,” he told the Herald on Thursday morning. “They feel a sense of justice.”

Clenney’s defense attorneys could not immediately be reached for comment on Thursday morning.

In her order, the judge sided with prosecutors who had argued that Clenney made millions on the U.K.-based adult webcam site, and could earn a living overseas if she fled the country. She wrote that Clenney, of Texas, “has no ties to Florida and ample means to leave the country were she to choose to do so. The Defendant has millions of dollars at her disposal and the ability to make more outside of the jurisdiction of the United States.”

Cruz Shearon also pointed out that Clenney has a history of violating court orders of supervision in other cases outside of Florida.

“The Court does not agree that placing defendant on house arrest with her parents in Texas is an appropriate form of release in this case,” she wrote.

Clenney has never denied she fatally stabbed Obumseli, who was unarmed, during a heated argument. But her defense attorney have insisted that she was the true victim of domestic abuse, and was protecting herself from Obumseli that night.

The ruling came weeks after prosecutors, during a two-day detention hearing, argued that Clenney was the true aggressor. Miami-Dade’s Medical Examiner testified that the wound penetrated deeply enough that it had to be an up-close stabbing, not her throwing the knife as she told police.

Judge Cruz Shearon agreed, writing in her order that the “defendant’s version of how victim’s stab wound occurred is not supported by the evidence.”

The state also argued that the fatal stabbing capped months of physical and verbal abuse heaped on Obumseli.

Prosecutors pointed to a series of suspected attacks by Clenney on Obumseli in the year or so before the killing. One resulted in her arrest in Las Vegas for battery. Several others — including two stabbings of Obumseli — were chronicled in a series of text messages released by the state.

Several audio recordings made by Obumseli revealed Clenney’s unhinged screaming at her boyfriend; on one occasion, she used a racial slur against him.

Clenney’s defense attorneys, Frank Prieto and Sabrina Puglisi, argued the recordings, texts and other evidence were cherry-picked and provided “a one-sided snapshot in time. It’s not the whole story.”