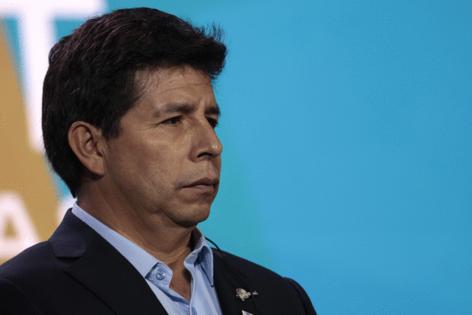 Peru’s President Pedro Castillo was impeached Wednesday, hours after he preempted the vote by attempting to dissolve Congress and install an emergency government.

Vice President Dina Boluarte will replace him, making her the first woman to govern the South American nation of 33.3 million people.

An impeachment hearing was already scheduled when Castillo announced his plan to dissolve Congress in a televised address from the Presidential Palace in Lima. He also issued a national curfew from 10 p.m. to 4 a.m. and ordered owners of illegal firearms to surrender them to the national police within 72 hours.

“We have taken the decision to establish a government of exception, to reestablish the rule of law and democracy to which effect the following measures are dictated: to dissolve Congress temporarily, to install a government of exceptional emergency, to call to the shortest term possible to elections for a new Congress with the ability to draft a new Constitution, in no more than nine months,” Castillo said.

But the embattled president’s stunning announcement failed to gain support. He was impeached by lawmakers “due to permanent moral incapacity” by 101 votes in favor, six against and 11 abstentions.

Castillo, a former school teacher, was elected in July 2021 by a narrow margin. Congress voted to impeach him about two hours after his address Wednesday, according to the Peruvian newspaper El Peruano.

Early Wednesday afternoon, the U.S. Embassy in Lima condemned Castillo’s announcement and rejected any actions that would stop Congress from fulfilling its duties.

“The United States emphatically urges President Castillo to reverse his attempt to close Congress and allow democratic institutions in Peru to work according to the constitution,” the embassy said in a message shared on social media. “We encourage the Peruvian public to stay calm during this uncertain time.”

Peru’s attorney general Patricia Benavides also expressed her “emphatic rejection” of “any violation of the constitutional order,” urging Castillo to “respect the Constitution, the rule of law, and democracy, that has cost us so much,” the Agence France-Presse reported.