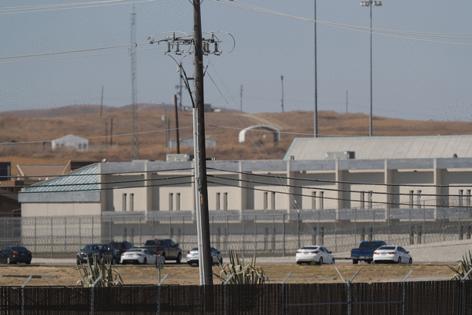 Federal officials allege that its warden abused his position to run the place like his own personal harem.

“According to Victim 2, GARCIA would tell her at breakfast, which was before he did rounds, whether it was a ‘yes’ or a ‘no’ day,” an FBI affidavit filed in the case against Ray J. Garcia states. “Victim 2 understood that if it was a ‘yes’ day, she should be naked when GARCIA did his rounds.”

The shocking affidavit that details alleged abuses at the all-female, low-security Federal Correctional Institute Dublin — including allegations that then-Associate Warden Garcia, 55, forced an inmate to penetrate herself with a candy cane — was filed in September of last year.

On Monday, Garcia showed up to federal court in Oakland, California, a 30-mile drive west on Interstate 580 from the prison he once ran, to face seven counts of sexual abuse conduct involving three female inmates. He has pleaded not guilty.

Garcia was not only top dog at the prison — he was promoted in late 2020 to warden before the investigation led to his being placed on administrative leave the following July, according to Department of Justice statements — he was also the one responsible for training facility staff on the Prison Rape Elimination Act and was chair for the PREA audit scheduled for 2020 before being postponed due to the COVID-19 pandemic.

Garcia had nothing to say to local reporters when he left the courthouse following the opening day of his trial, but the affidavit said he wasn’t so quiet to his alleged victims.

One victim told investigators that Garcia “told her that he liked convicts because they do not go to the cops, that he could not be fired, and that she could not ‘ruin him.’”

One of the women testified Monday that she started developing romantic feelings for Garcia and that their first sexual encounter was in the bathroom of the visitor area of the prison, according to the AP.

Garcia had told her that he had struck an interest in her immediately and, according to court docs, shared personal details like his birthday, his son’s name and that he owned a timeshare in Las Vegas.

The victim said on the stand that at first Garcia was “very sweet” but eventually became “very pornographic, very vulgar.”

But that’s after he had already allegedly established a domineering pattern of sexual abuse that included directing the woman to be naked in her cell when he did his rounds so he could photograph, molest and rape her, according to court filings.

Charging documents state he also used his position to make sure his alleged actions were not caught on surveillance cameras, but that he wasn’t as careful with his Bureau of Prisons-issued cell phone.

On July 22, 2021, federal law enforcement executed searches on his residence, his office, his car and his person. On his laptop and BOP-issued phone, investigators found naked pictures of Victim 1 in a prison cell and also “hundreds of images of male and female genitalia, as well as nude and partially nude photographs of GARCIA and other women,” according to court documents.