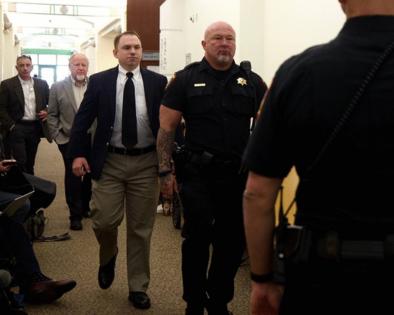 FORT WORTH, Texas — Jury selection in the murder trial of former Fort Worth police officer Aaron Dean resumed Wednesday with the court excusing 29 out of 74 prospective jurors who were individually questioned by 4 p.m.

On Monday, Judge George Gallagher divided the original jury pool of almost 200 people into two groups based on whether they had read or watched news coverage of the case.

Slightly more than half said they had seen some coverage. That group returned to court Wednesday, when most of those who were dismissed during questioning indicated some type of bias or said they had already formed an opinion on the guilt or innocence of the defendant. Others who were excused included those who had doctor’s notes or struggled to understand spoken English, as well as a sheriff’s office employee who took Dean’s mugshot.

The second group of prospective jurors, who said they weren’t familiar with the case, will be questioned on Thursday.

Dean’s trial in the 2019 shooting death of Atatiana Jefferson is scheduled to begin Monday in Tarrant County’s 396th District Court. Gallagher said he expects the trial to conclude in the middle of the following week.

Gallagher has said that he will wait to see how jury selection progresses before making a final ruling on a defense motion for a change of venue, which, if granted, would move the trial out of Tarrant County.

A jury is expected to be chosen by Thursday or Friday.

Each member of the jury pool filled out a 25-page questionnaire Monday. Proposed jury questionnaires filed with the court indicated the attorneys wanted to ask the pool about issues including how they feel about police officers and the criminal justice system, whether they believe police officers treat minorities differently, and whether they keep guns in their homes.

Gallagher told the jury pool that the case has received a lot of media coverage and that his goal is to find 14 people — 12 jurors and two alternates — who can keep an open mind.

Jefferson, 28, had moved into her mother’s home on East Allen Avenue to help care for her mother as her health declined. On the night of the shooting, Jefferson was playing video games with her 8-year-old nephew, Zion Carr, who was the only witness inside the house.