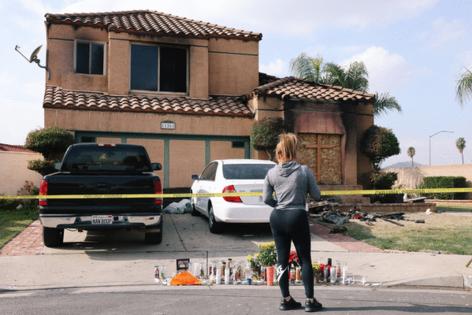 LOS ANGELES — Neighbors described a horrifying scene as a man who police say catfished a teenage girl arrived at her family’s home in Riverside on Friday, killing three relatives, and then leaving with her and the home on fire.

Neighbors said Monday that they saw the suspect’s vehicle parked a few doors from the house and heard arguing from the home. Then, the man fled with the girl as a fire burned inside the home.

The smell of ash lingered in the quiet cul-de-sac Monday. A wooden cross was nailed to one of the broken windows that was boarded up after the fire.

Antonio Castro was out when the attack took place but said his home camera alerted him of smoke in the neighborhood, and he rushed back. He found smoke rising from his neighbor’s home and saw three bodies in the front yard.

Police arrived at the 11200 block of Price Court to see smoke pouring from the home, said Officer Ryan Railsback, a spokesman for the Riverside Police Department.

Firefighters were extinguishing the blaze when they discovered the bodies of a man and two women inside the house, Railsback said. The victims were identified as Mark Winek, 69; his wife, Sharie Winek, 65; and their daughter Brooke Winek, 38.

Investigators have determined that the outdoor disturbance involved a teenager who lived in the house, Railsback said. The man she was with — Austin Lee Edwards, 28, a law enforcement officer from North Chesterfield, Va. — was identified as the main suspect in the three deaths, he said. Edwards was tracked Friday evening to San Bernardino County, where he was fatally shot by sheriff’s deputies in Kelso after firing a gun at officers, law enforcement officials said. The girl was not harmed.

Earlier, authorities reported that Edwards had been killed in Needles.

Riverside police detectives determined that Edwards had met the teen online and misrepresented who he was, Railsback said.

“Detectives determined Edwards had met the female teenager through the common form of online deception known as ‘catfishing,’ where someone pretends to be a different person than they actually are,” authorities said in the release. “It is believed Edwards had developed an online relationship with the teen and obtained her personal information. He traveled from Virginia to Riverside where he parked his car in a neighbor’s driveway and walked into the teen’s home.”