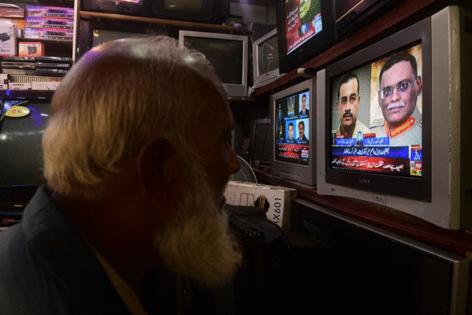 Prime Minister Shehbaz Sharif named General Asim Munir as Pakistan’s next army chief, a choice that could harden former premier Imran Khan’s opposition to the government and stoke his high-stakes clash with the military.

Khan, who as prime minister had removed Munir from the role of intelligence chief, would see the appointment as a possible obstacle to his attempt to force early elections.

Khan had instead been seeking a snap poll that would allow the new government — presumably led by his party — to choose the army chief. The appointment is important because the institution wields outsize influence over the country’s politics, having directly ruled the nuclear-armed nation for about half of its history since its creation in 1947.

Indication of Khan’s thinking could come as early as Saturday, when he’s due to hold a protest rally against the government. Any deepening of the political crisis risks further delaying a loan disbursal from the International Monetary Fund and spooking investors ahead of a dollar bond repayment in December.

The new chief and the core military leadership “will likely be struggling to manage Khan’s populism and popularity because it could return him to power in the 2023 elections,” according to Kamran Bokhari, director analytical development at the Washington-based New Lines Institution for Strategic & Policy.

The quick approval by the president “shows that Khan wants to resolve his differences with the military,” said Shaista Tabassum, the head of the international relations department at the University of Karachi. “But the differences have gone so deep that it will take some time for the two sides to patch up.”

Khan had waged a kind of rebellion” against the army, she said. “I don’t see a patch up in the near future.”

Earlier this month the former cricket star had named Sharif and a general in the military’s intelligence wing as responsible for a shooting attack at a public rally that left him with leg injuries. The army and the prime minister had denied the charge.

Investors were a little concerned about potential delays in the appointment getting the president’s approval, said Adnan Khan, head of international sales at Intermarket Securities Ltd., in Karachi.

Munir is currently serving at the army headquarters as quartermaster general, overseeing supplies for all military units. Apart from the ISI, he has also led the military intelligence department. He has served under Bajwa’s direct command in the often-troubled northern areas that border Afghanistan, China and India.

Khan’s attempts to control military promotions have been at the root of Pakistan’s recent political tensions. Late last year, he publicly opposed Bajwa’s choice to lead the nation’s spy agency, voicing support for one of his own allies to stay in the role. The army chief eventually got his way, but the incident sowed the seeds for Khan’s ouster roughly six months later.

The new military leader will also have to deal with a revived debate on the role of the institution in nation with a history of civilian rulers being overthrown by the army.

(With assistance from Ismail Dilawar and Faseeh Mangi.)

BALTIMORE — Abuse survivors who were featured in “The Keepers,” a widely viewed 2017 Netflix documentary about clergy sexual misconduct at a Baltimore Catholic girls’ school in the 1960s and ’70s, have filed a ...Read More

An advisory panel established by South Africa’s parliament found there are grounds for lawmakers to investigate President Cyril Ramaphosa in connection with a scandal over a robbery at his game farm, a finding that could...Read More

MOSCOW, Idaho — Many students are back on campus this week following the slayings of four University of Idaho students in Moscow.

U of I Dean of Students Blaine Eckles told the Idaho Statesman in an interview Wednesday ...Read More

JEFFERSON CITY, Mo. — One of the leading candidates for governor in the 2024 election is making same-sex marriage an ...Read More