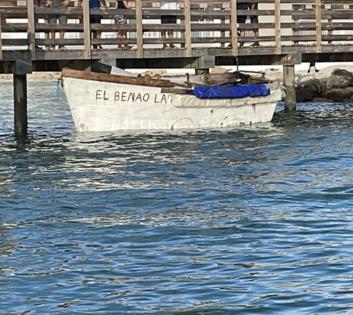 MIAMI — The steady arrival of migrants continued in the Florida Keys on Wednesday with a group of 19 people from Cuba in Key Colony Beach, according to the U.S. Border Patrol.

They arrived in the MIddle Keys city on a small wooden boat, Walter Slosar, the Border Patrol’s head agent of Miami operations, said in a statement on Twitter.

The landing is part of the largest maritime exodus from Cuba in nearly 10 years. Last fiscal year, which ended in October, was the busiest year for the Coast Guard patrolling the Florida Straits for migrants since the 2008 fiscal year.

Since Oct. 1, the Coast Guard has already stopped 2,243 people at sea heading for South Florida. At this rate, the number of migrants intercepted on the water will more than double the 5,396 people the Coast Guard stopped in FY 2022 by September.

The Coast Guard continues to urge people from Cuba and Haiti not to make the dangerous journey, but with political and economic conditions deteriorating in both countries, the warnings are going largely unheeded.

Earlier this week, a maritime trek turned tragic when a Cuban migrant boat capsized off the coast of Little Torch Key in the Lower Keys. Six bodies were found in the ocean between Saturday and Monday, and the search for four others was called off Monday night, leaving four others presumed dead, according to the Coast Guard.

The Keys was also the scene of a harrowing rescue operation when the Coast Guard and other agencies encountered an overloaded and disabled sailboat packed with peopled from Haiti off Key Largo. The Coast Guard initially took about 100 people, including small children and babies, from the boat.

But, in rough seas, the boat continued on until it reached a sandbar off Islamorada. When the vessel beached in shallow water, 18 men jumped in the water, prompting a frantic hours-long search in near pitch-dark night conditions by federal agents and local law enforcement.

The men were eventually safely recovered from the water. At least one was found clinging to the base of the Whale Harbor Channel Bridge trying not to get swept away by the water rushing through the channel.