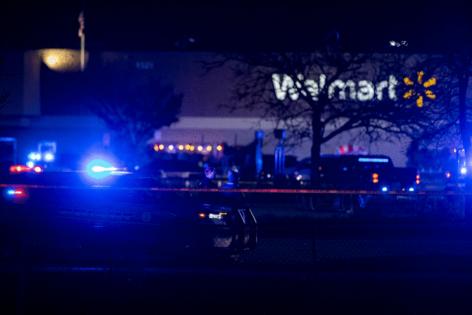 CHESAPEAKE, Va. — Seven people died in a shooting inside a Chesapeake Walmart late Tuesday night when a store employee opened fire with a pistol, starting in the break room, the police chief said.

The shooter died of a self-inflicted gunshot, Chief Mark Solesky confirmed Wednesday. The man’s name has not been released because next of kin have not been notified, Solesky said.

But two sources with knowledge of the investigation confirmed Wednesday the shooter is Andre Bing. Police were stationed Wednesday morning outside the Chesapeake home that property records said Bing purchased in 2019.

Six victims have died, and five are being treated at area hospitals. Late Tuesday night they were at Sentara Norfolk General Hospital, confirmed Mike Kafka, a spokesman for Sentara Healthcare. Their names have not been released, and Kafka could not provide their conditions.

Grief was on display outside both the hospital and a family reunification center set up in Chesapeake.

Just after 2 a.m., a man was escorted out of the emergency room after he erupted in emotion, wailing and shouting. “They killed my brother,” he yelled as he ran away.

Shrieks cut through the air as a group of people left the reunification site at the Chesapeake Conference Center, illuminated by the flashing blue lights of a Chesapeake police car.

Gathered with others outside the Sam’s Club on the other end of the shopping center, Walmart worker Joseph Strempski said he was in the maintenance closet when he heard the gunfire. He then saw people running and ran with them.