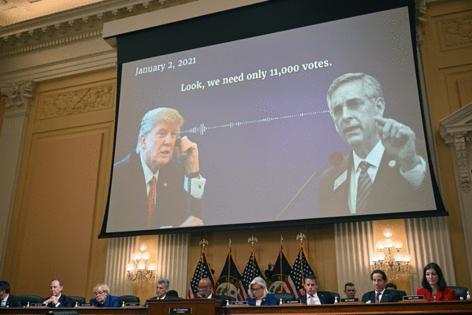 ATLANTA — Former President Donald Trump is “extremely exposed” to criminal liability in Fulton County as he prepares to announce his third campaign for the nation’s top office. That’s according to an author of a report analyzing the local investigation into whether Trump or his allies illegally interfered in Georgia’s 2020 elections.

Among the “overwhelming evidence” of Trump’s culpability in Georgia is the Jan. 2, 2021, phone call he placed to Secretary of State Brad Raffensperger and the appointment of a slate of 16 fake GOP electors in Georgia, said Norm Eisen of the Washington-based Brookings Institution in an interview.

“I don’t see how he does not get criminally charged together with others who were involved in both of those schemes,” said Eisen, who previously served as President Barack Obama’s ethics czar and special counsel to the House Judiciary Committee during Trump’s first impeachment.

Eisen is a co-author of an updated 304-page report from Brookings being released Monday that analyzes the publicly available evidence in the criminal investigation launched by Fulton County District Attorney Fani Willis in February 2021. A special grand jury armed with subpoena power has been helping the DA gather evidence since May.

Among Willis’ interests are: calls Trump and his allies placed to Georgia officials between November 2020 and January 2021; the leadership shakeup in the Atlanta U.S. attorney’s office in January 2021; testimony Trump’s personal attorney Rudy Giuliani and others gave to state legislators in Dec. 2020; the fake electors; the breach of elections data in Coffee County in January 2021; and efforts to pressure a Fulton County poll worker to falsely admit to election fraud.

The report includes a timeline of key dates, an analysis of state laws that might have been broken and a glossary of key players. It also goes into great detail about the possible defenses Trump could raise if indicted, such as his lawyers arguing that he is immune from prosecution because his actions occurred while he was president.

But Eisen predicted that defense, if raised, is a loser.

“When you have behavior that is as far out as this, there is no protection for it,” he said.

Fleming said other charges that could be brought include criminal solicitation and forgery in the first degree for the fake electors, who signed their names to a document sent to the National Archives swearing to be Georgia’s duly elected presidential electors.