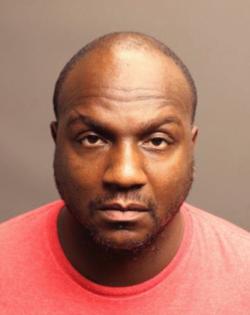 LOS ANGELES — A teenager and a woman are in custody in the slaying of rapper PnB Rock, who was gunned down two weeks ago at Roscoe’s House of Chicken & Waffles in South L.A., Los Angles police confirmed to the Los Angeles Times on Wednesday. Authorities are searching for a third suspect whom they describe as armed and dangerous.

Freddie Trone’s photograph was released by investigators Wednesday in an effort to track him down and arrest him. Authorities believe Trone was involved in the rapper’s killing, which occurred during a violent robbery inside the Manchester Avenue eatery on Sept. 12.

In the attack at Roscoe’s, a gunman demanded jewelry and other valuables before getting into a struggle with PnB and opening fire, LAPD Chief Michel Moore said.

Moore said the shooting occurred soon after the rapper was tagged online as being at the restaurant, and police are investigating whether that is what prompted the attack. Police say such crimes linked to social media are rare. But Moore said he’s concerned about the proliferation of guns on the streets being used by robbers targeting victims for high-end jewelry.

Rock, 30, whose real name was Rakim Allen, had been at the restaurant with his girlfriend, who had posted a location-tagged photo in a since-deleted Instagram post. The shooting reignited discussion of the dangers of the real-time use of social media by celebrities who post about their locations and luxury possessions.

The killing sparked sadness and outrage among fans as well as community activists, who say violence at a popular eatery is unacceptable.

“I want to see the community heal. There has to be a more comprehensive strategy to make it clear that taking material items like an expensive watch is not worth more than a life,” said Skipp Townsend, a longtime gang interventionist in Los Angeles.

He pointed out the gunman could have killed so many people in the lunch crowd.

“This happened while he was actually dining, and that is truly tragic,” Townsend said. “Arrests don’t stop the violence. Arrests don’t bring closure to families. We need to do a long-term strategy that prevents someone from considering such acts.”

At the time of Rock’s slaying, Trone was on probation after being convicted in February 2021 of being a felon in possession of a firearm. Trone received a three-year suspended sentence, 43 days of community service and two days in jail. He was originally arrested Aug. 12, 2020, with a firearm in public along with ammunition.

At the time of the 2020 arrest, Trone was on three years’ probation for a July 2017 incident in which he was convicted of driving a car with wanton disregard for public safety. Prosecutors at that time dismissed driving under the influence charges as part of a plea.

In August 2013, he was convicted of assault by means likely to produce great bodily injury and received a four-year prison sentence for the 2012 attack, court records show.

ATLANTA — It was summer 2020 and John Hollis, a publicist at George Mason University, was asking a scientist about his research on COVID-19 antibodies, when the scientist turned the tables. The scientist, Lance Liotta, ...Read More

MIAMI — A new Broward School Board member is being denounced by civil-rights groups, LGBTQ leaders and two of her fellow board members after saying she welcomes support from all kinds of groups, even the far-right Proud ...Read More