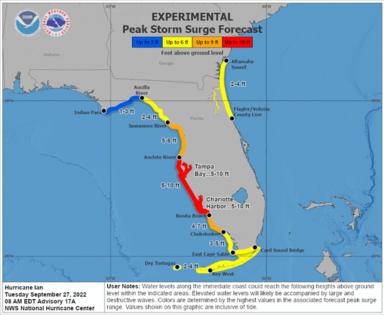 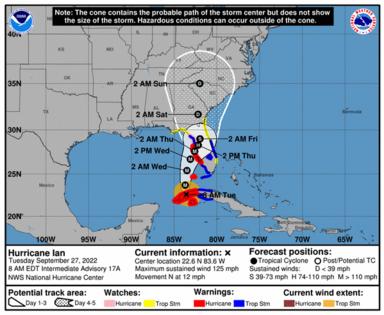 MIAMI — Hurricane Ian’s projected path shifted slightly Tuesday, on a track that would push the powerful storm to an earlier potential landfall south of the Tampa Bay area — a small but significant change for a Gulf Coast vulnerable to storm surge.

If the track holds — and forecasts stress that it may still change — it could reduce the flooding threat to Tampa Bay but raise it for coastal communities to the south like Sarasota and Cape Coral. Two days out from landfall, Florida was already feeling Ian’s first gusty, rainy bands.

In its 2 p.m. EDT Tuesday forecast, the National Hurricane Center said Hurricane Ian is expected to bring historic levels of storm surge to the Sarasota area. That area now faces higher predicted storm surge levels than Tampa Bay — potentially up to 12 feet above dry land. That’s in addition to up to 24 inches of rain for the central West Florida region.

The latest forecast also bumped up landfall to Wednesday evening, bringing a tropical storm warning to all of southeast Florida, including coastal Miami-Dade and Broward. South Florida was already seeing street flooding Tuesday morning, and officials urged residents of the Keys to take shelter as tornado warnings popped up.

Florida’s entire west coast could see devastating storm surge and intense rain for several days as the storm slows to a crawl along the coast.

Mandatory and voluntary evacuations have been called for more than half a million people in eight counties on Florida’s west coast, schools have closed in 16 counties (including Miami-Dade and Broward) and all of Florida remains under a federally declared state of emergency.

Florida Emergency Management Director Kevin Guthrie urged west coast residents to evacuate to South Florida and said to expect power to be out for up to a week in some parts of the state.

Jamie Rhome, acting director of the National Hurricane Center, said in a Tuesday morning broadcast that Floridians are “starting to run out of time” to prepare for Ian’s arrival.

“Time is really ticking here. If you’re in the path of this storm and you’ve been ordered to evacuate, you really should do so. We’re really concerned about this area,” he said.

Rhome also urged those in the Tampa Bay region not to see the shifting track as a sign they’re all clear, but the region is still expected to see hurricane-force winds, substantial storm surge and heavy rains this week.