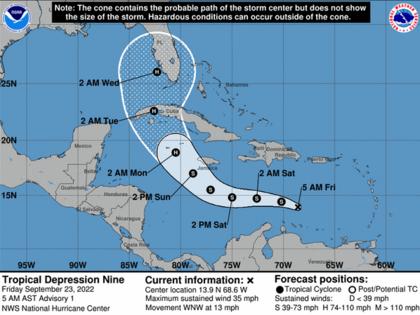 MIAMI — A tropical depression formed Friday morning in the hot waters of the Caribbean, a system that the National Hurricane Center expects to significantly strengthen and make landfall somewhere in Florida around Wednesday — potentially as a Category 3 hurricane.

Exactly where is the big question and concern, with nearly the entire peninsula potentially at risk. The first cone of concern is pointed near Fort Myers, but forecasters caution that the initial track could change.

The National Hurricane Center, in an 11 a.m. update, forecast that Tropical Depression No. 9 to strengthen into a tropical storm sometime Friday. If it beats out other brewing systems in the Atlantic, it would be named Hermine.

At five days out, the hurricane center’s error cone is nearly 200 miles wide, and the exact forecast for where the center of the storm (or its impacts) makes landfall could shift in coming days.

Jamie Rhone, acting director of the NHC, told Floridians it was time to check hurricane supplies and top off gas tanks but warned that it was too soon to know exactly where or how the storm could impact the state.

“I’m a Floridian too so I’m going to speak to you candidly, don’t panic,” he said. “We are still in the early stages of this event.”

South Florida and the Keys need to have preparation done by Monday night, he said. On the current track, South Florida could see winds starting to pick up Tuesday night, although that could change.

“We have a lot of time. This forecast can and will evolve,” he said. “It is important that you take this threat seriously.”

On Friday morning, Tropical Depression Nine was still battling wind shear leftover from Hurricane Fiona’s run through the Caribbean earlier this week, which forecasters said will hold it back from strengthening into a tropical storm for a little longer, maybe later Friday.