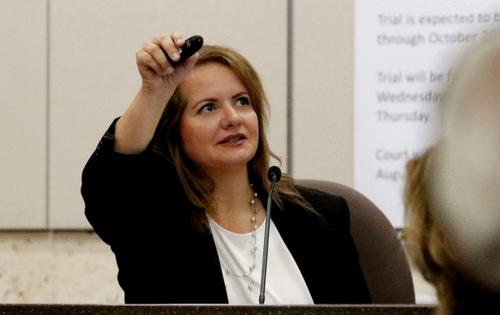 Johnson previously testified she did not think the human blood protein tests performed by Angela Butler, a senior forensic DNA analyst with the Serological Research Institute in Richmond, were reliable.

This was because there have not been verification studies on how the test reacts with blood aged for more than two decades or blood in soil and the fact that different parts of the same sample yielded different results, she said.

The soil samples were extracted from beneath the deck of Ruben Flores, Paul Flores' father, who is also charged in the case.

Investigators believe Ruben Flores helped hide Smart's body after Paul Flores killed her and that, at one point, her body was buried underneath the deck.

When it came to the DNA found on the mattress cover presumably from Flores' dorm room, she came to the same conclusion as Butler: Neither Flores nor Smart could be included or excluded from the sample taken from a small stain.

The main difference between Johnson's and Butler's opinions on the mattress cover was whether the data extracted from the stain should be considered separate from data taken from the sample around the stain.

On his cross-examination, San Luis Obispo County Deputy District Attorney Chris Peuvrelle focused on Johnson's qualifications, noting that she had not worked in a lab since 2003.

The lab she did work in was not accredited by any lab accreditation organization, Johnson testified.