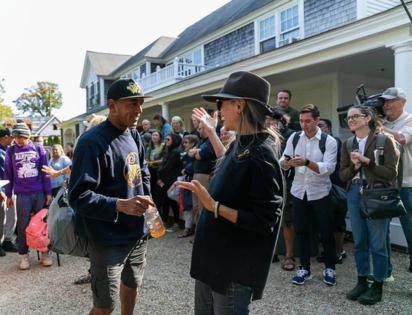 TALLAHASSEE, Fla. — When Florida Gov. Ron DeSantis’ administration needed a company it could trust to carry out a controversial program to transport migrants to other states, it chose an unusual option.

Although Destin-based Vertol Systems Company is in aviation, its primary business is training pilots for the military and providing helicopters across the globe.

But the company was familiar to a key member of the DeSantis administration: Larry Keefe, the state’s “public safety czar” responsible for carrying out the governor’s anti-immigration programs. The company also has a private jet that flew from Florida to San Antonio a week before charter flights took 48 migrants to Martha’s Vineyard.

Before DeSantis hired Keefe, and before he was named U.S. Attorney for Florida’s Northern District by then-President Donald Trump, Keefe represented Vertol Systems in a dozen lawsuits between 2010 and 2017.

Keefe led the company’s litigation strategy, suing former employees accused of misusing funds, contractors suspected of stealing company secrets and a local lawn care company that ran over a wire connected to one of the company’s helicopters.

The state has paid Vertol Systems more than $1.56 million to, among other things, arrange last week’s migrant flights from Texas to Martha’s Vineyard, which sparked outrage, a criminal investigation by a local sheriff and a federal lawsuit by some of the migrants.

So far, Keefe’s ties to Vertol Systems are the best explanation of why the state hired the company. The DeSantis administration has disclosed few details about the secretive program, which is being paid for with $12 million in interest earned from federal COVID-19 relief money.

State officials haven’t said how they chose Vertol Systems, whether the state solicited multiple bids for the work as required by the Legislature, or even released the state’s contract with the company.

The governor’s office didn’t respond to requests for comment.

Court documents and other records show the company is active in GOP politics. In addition to Keefe, U.S. Rep. Matt Gaetz, R-Fla., whom Keefe hired before Gaetz was elected to Congress, also represented Vertol Systems in two 2010 lawsuits. The company and its owner, James Montgomerie, have given $27,000 to Republican politicians and political committees since 2005.

Vertol Systems is also a partner in a company called Zeppelin Holdings LLC with Jay Odom, a prominent Okaloosa County developer and close associate of Gaetz.

In 2009, Odom was indicted along with Florida House Speaker Ray Sansom and the then-president of Northwest Florida State College on charges of funneling state school construction funds to build a hangar for Odom’s business, Destin Jet. The charges were dropped, but in 2013, Odom pleaded guilty to campaign finance violations in a separate case and was sentenced to six months in prison.

Zeppelin Holdings LLC owns an eight-seat Cessna Citation jet that flew a similar course as the planes that went to Martha’s Vineyard. Flight tracking data show that on Sept. 5, the week before the Martha’s Vineyard flights, Zeppelin’s Cessna flew from Destin to Tallahassee, stopped in Tampa, returned to Destin and then traveled to San Antonio, where it stayed until Sept. 7. Flight records for the same jet from the previous month show no trips to San Antonio.

The jet returned to San Antonio again on Sept. 16, two days after the flight to Martha’s Vineyard had been completed. Tracking data show that the jet remained at the San Antonio airport for an hour, and returned to Destin.

Neither Keefe, Odom nor Vertol Systems responded to questions about whether the Zeppelin Holdings jet was authorized to participate in the governor’s initiative.

Keefe was hired by the governor’s office last September as the state’s first “public safety czar,” with a $131,725 salary.

At the time, DeSantis said Keefe’s role would be “to protect Florida taxpayers from bearing the burden of reckless immigration policies.”

Since then, the state has imposed a number of rules and policies to target illegal immigration.

Florida has sent state law enforcement officers to the southern border in Texas at a cost of at least $1.6 million; cracked down on Florida shelters that provide housing and services to migrant children on behalf of the federal government; sued the Biden administration over its immigration policies; and issued a broad executive order that, in part, “encouraged” state law enforcement officers to pull over drivers who are transporting migrants into the state.

In December, DeSantis also asked the GOP-controlled Legislature for millions of dollars to export migrants from Florida to other states, mentioning the wealthy enclave of Martha’s Vineyard.

Vertol Systems Company doesn’t seem like an obvious fit to regularly fly dozens of people across the country.

The company’s business has focused on aircraft maintenance and support, training pilots and leasing its helicopters to fisheries and other companies around the world. From 2000 to 2020, the company received more than $25.7 million in defense contracts for flight training, records show.

Since news broke about the company’s involvement in DeSantis’ migrant flight programs, its website was taken offline. In April, its website said it operated four types of helicopters and three types of small planes with a maximum capacity of 12 people. (FAA records show the company has 55 aircraft.)

None of the company’s planes flew the 48 migrants to Martha’s Vineyard. Instead, flight records show Ohio-based Ultimate JetCharters flew them, apparently as a subcontractor. The state’s contracting websites show no payments to the company. Ultimate JetCharters, which specializes in corporate shuttles, sports team travel and casino trips, has not responded to repeated requests for comment about how it came to be involved in the program or whether it would continue the work.

Another round of flights by Ultimate JetCharters was scheduled this week to fly migrants from Texas to Delaware — Biden’s home state — but they were canceled without explanation, leaving the migrants stranded in San Antonio.

Since 2010, Vertol Systems and Montgomerie have used the law firm Keefe, Anchors & Gordon to represent the company in more than 20 lawsuits filed in Okaloosa County.

In 2012, Keefe and Vertol Systems Company sued a Niceville lawn care company, Dogwood Services. An employee of the company who was cutting the grass at the Destin airport hangar ran over a wire attached to one of Vertol’s helicopters.

Vertol said it was entitled to damages, measured by what renting a similar helicopter would cost. The defense argued that the helicopter hadn’t been flown for a month before the incident, and wasn’t flown for four months after repairs.

The judge sided with Vertol Systems. Courtney Smith, then an attorney representing Dogwood, said she remembers it was a highly litigious, back-and-forth case.

And she remembers Keefe, who she said was particularly combative — a reputation he had in the area, she said.

Smith, who now works in South Florida, said she can’t speak to how Vertol Systems operates, but that Keefe would “argue about anything just to be right.”

She said it didn’t surprise her to find out the company was involved in the migrant flights.

In 2017, Keefe was chosen by Trump to be the U.S. attorney for Florida’s Northern District, overseeing federal prosecutions for the state’s Panhandle and Gainesville.

In 2020, the firm sued a Crestview employee it claimed violated the company’s non-disclosure agreement. The employee claimed the violation came from sending photos of workplace hazards to the federal Occupational Safety and Health Administration. The court sided with Vertol Systems, and the employee was ordered to destroy or turn over any materials.

That same year, a New Zealand pilot who crashed one of the company’s helicopters while working for a tuna fishery in the Marshall Islands sued the company, claiming he was still owed more than $16,000. Three days later, the company sued the pilot, claiming the crash was because of negligent and/or reckless operation. That case is still open.

And in 2019, Vertol took an aggressive approach after a pilot crashed and died during a fish-spotting expedition near Micronesia.

Jeffrey Lynn LaVere, a 39-year-old former U.S. Army sergeant who served in the military for 17 years, was working for Vertol Systems as a contracted pilot.

About one year after his death, his wife filed a wrongful death lawsuit in Oregon, where Vertol Systems was based. She said that four days before her husband’s crash, he had texted her “expressing his concerns about the poor condition of the helicopter,” according to court documents.

Seven days later, Vertol Systems filed its own lawsuit against the wife, claiming that she, as the representative of her husband’s estate, owed the company money because the helicopter was damaged.

In the complaint, Vertol Systems attorneys said the crash was “solely the result of LaVere’s negligence and recklessness.”

Attorneys for LaVere’s wife criticized the company’s lawyers for legal maneuvering that included removing her as an administrator for her husband’s estate — and installing their own person as a replacement.

“Our client is a young widow who has suffered greatly,” her attorney told Vertol’s Oregon attorneys, according to that state’s case file. “Your client seems intent on increasing that suffering.” A National Transportation Safety Board investigation found the probable cause of the accident to be “the pilot’s failure to maintain clearance above the surface of the ocean.” The lawsuits were dropped, with both sides paying their own attorney’s fees.