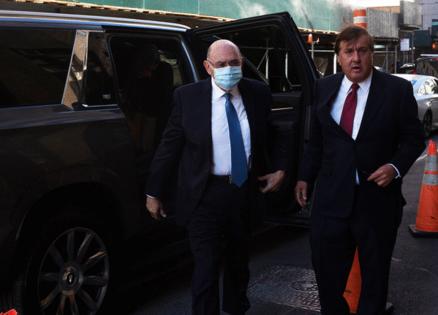 Allen Weisselberg admitted to receiving more than $1.7 million in off-the-books perks while chief financial officer of the Trump Organization on top of his hefty salary, defrauding the taxpayer and Uncle Sam by disguising the fringe benefits as work expenses.

As part of his plea deal, the CFO, whose June 2021 indictment came after he refused to flip on Trump, will have to testify against the family’s real estate business when it goes on trial for a host of financial crimes this fall.

If prosecutors and the court are satisfied with Weisselberg’s testimony, he’ll be sentenced to five months max on Rikers Island and five years of probation, said state Supreme Court Justice Juan Merchan.

“(If) you fail to testify truthfully at the upcoming trial of the Trump Organization, or if you fail to fully repay the taxes due ... those will be considered violations of the plea agreement,” Merchan warned.

“I would then not be bound by my sentence promise,” the judge continued. “I would be at liberty to impose any lawful sentence, which again, in your case, would include imprisonment up to five to 15 years.”

The judge also ordered Weisselberg to cough up nearly $2 million in restitution and fines and withdraw all defense motions filed on his behalf and waive any appeals.

“In one of the most difficult decisions of his life, Mr. Weisselberg decided to enter a plea of guilty today to put an end to this case and the yearslong legal and personal nightmares it has caused for him and his family,” his lawyer, Nicholas Gravante, said. “Rather than risk the possibility of 15 years in prison, he has agreed to serve 100 days. We are glad to have this behind him.”

The scheme that Weisselberg admitted to lasted from 2005 through 2021. For most of that time — through 2017 — Trump was president and owner of the company. Trump has not been charged in the case, which stems from the district attorney’s ongoing, broader probe into his business dealings.

Weisselberg’s plea deal doesn’t require he cooperate with prosecutors investigating the former president or his eponymous family business. Still, his guilty plea and testimony could have devastating consequences for the Trump companies that were indicted alongside him.