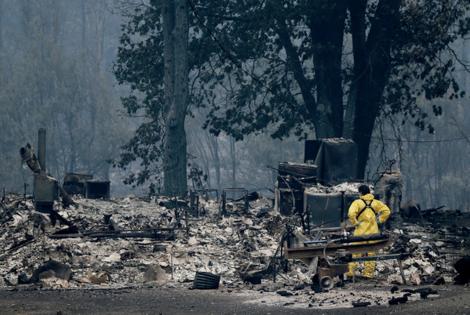 LOS ANGELES — Residents in Northern California allege that sparks from PacifiCorp's high-voltage transmission lines and other equipment are what ignited the deadly McKinney fire last month near the California-Oregon border in Siskiyou County, according to a lawsuit filed earlier this week.

The McKinney fire has burned more than 60,000 acres in rural Siskiyou County since it began on July 29. Four people died as the fire swept through the area, and hundreds of homes were damaged or destroyed, according to authorities. The official cause of the fire, which is 95% contained, remains under investigation.

PacifiCorp, which is owned by Warren Buffet's Berkshire Hathaway Energy holding company, operates an electrical grid across Oregon, Washington and Northern California. The utility company reported to California regulators that it operates a power line that runs near Highway 96 in Siskiyou County where where the McKinney fire is thought to have started from, the California Department of Forestry and Fire Protection reported.

Residents whose homes and property were destroyed or damaged in the fire claim the utility company "negligently, recklessly, and willfully failed" to inspect and maintain its equipment in dry vegetation, according to their complaint filed on Monday in Sacramento Superior Court. They argue PacifiCorp should have been aware that the conditions surrounding its equipment and the strong winds and low humidity created a hazard that led to the wildfire.

"This wildfire was not the result of an 'act of God' or other force majeure," the lawsuit says. "This wildfire was started by sparks from high-voltage transmission lines, distribution lines, appurtenances, and other electrical equipment within PacifiCorp's utility infrastructure that ignited surrounding vegetation."

There are 25 plaintiffs named in the lawsuit filed by the San Diego-based law firm Singleton Schreiber. They claim the utility company "prioritized profits over safety" and were aware of extreme fire risk in the surrounding areas where the fire started.

Attorney Gerald Singleton said the fire was "totally avoidable" and his firm believes that the utility company's equipment failure is to blame for the fire.

"Every fire season, California is overrun by deaths, injuries, financial disasters, charred homes and ruined lives as a result of utilities such as PacifiCorp putting profits over safety," Singleton said in a written statement. "This is the second time in the last two years that PacifiCorp has started a fire that killed citizens of Siskiyou County."

PacifiCorp did not immediately respond to requests for comment.

The McKinney fire raged along the Northern California border and in the Klamath National Forest. It was fueled by intense heat, dry vegetation and low humidity.

Four separate times, columns of smoke rose from the flames beyond the altitude at which a typical jet flies, penetrating the stratosphere and injecting a plume of soot and ash miles above the Earth's surface. It's a phenomenon known as a pyrocumulonimbus cloud, a byproduct of fire that NASA once memorably described as "the fire-breathing dragon of clouds."