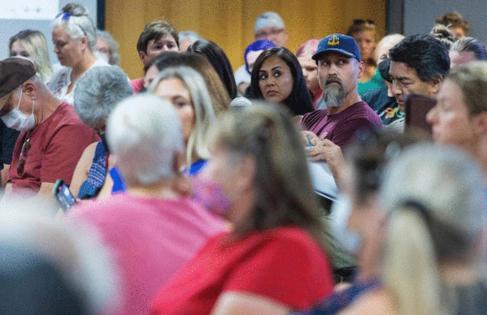 BOISE, Idaho — More than 100 people crowded into a room at the Meridian Library’s main branch on Wednesday night for a heated debate where people voiced concerns or offered their support about what books were accessible to children.

Chairs were stuck in every crevice of the room, and, when they were filled, people lined up in the hallway and leaned against the walls, overflowing into the entryway. A handful of attendees showed up with copies of “It’s Perfectly Normal” or “Sex is a Funny Word” — sex education books for children that have become increasingly controversial. Others wore T-shirts in support of LGBTQ rights or the freedom to read.

In line with similar movements across the U.S., the Meridian Library District’s monthly board meetings — events that normally draw few people — became a target after a group of Idaho residents accused the library of distributing “smut filled pornography” to children.

Over the past few weeks, members of the group encouraged people to go the library board’s meeting to speak out about the materials. The posts made the rounds on social media — drawing both support and opposition.

The board’s Wednesday agenda did not include an item about specific library materials, but dozens of people on each side of the issue spoke passionately during public comment, sharing personal and emotional stories. At times, the meeting turned contentious.

Those who came out in support of the Meridian Library made up a majority of the comments. Supporters called the library a safe place for their families, especially during difficult times in their lives. Parents are responsible for the books their children choose to read, they said. Libraries should have diverse and inclusive collections with books for everyone, they argued.

One supporter even broke out into song at the end of his public comment, before presenting the board with a $20 bill as a donation.

“You’re being well-taught to be afraid, of people who love a different way,” Eric Gironda sang to the library board and packed room. “For some folks who come here from some other place, you’re being quite carefully taught.”

But others accused the library of having sexually explicit material accessible to children. They said they weren’t trying to defund libraries or ban books — although one person who is a leader in the effort posted “Time to defund the Meridian Library Tax District” on Facebook earlier this month. Instead, many said they believed certain books should be put in places where children didn’t have access and called for an end to the sexualization of children.

At one point during the meeting, a woman began yelling “groomers” into the meeting room while someone was speaking. Several times throughout the meeting, as people cheered or clapped for comments, board chair Megan Larsen repeatedly banged her gavel and asked the crowd to remain silent.